The decomposed corpse of an unusual sea creature, which was stranded on the coast of Indonesia last week, intrigued the locals but also the whole world, and the experts tried to uncover, as fastest they could, which animal it actually was.

The local fisherman who had found this “monster” at first thought that it was the raft, but as he approached it, he started to believe that a huge squid was lying in front of him.

The creature has been in the center of attention for a few days, and the photos of it are now circulating around the world. The community has started to investigate the creature in order to reveal its species, how it got there in the first place as well as whether or not it will affect the climate changes.

Residents of the island of Seram were faced with another big question: how to get rid of the huge corpse.

The blood of this animal painted the color of water red, but this hasn’t prevented the residents and other curious eyes from approaching the unusual creature and taking photos of it as a memory.

George Leonard, a leading scientist at the nonprofit Ocean Committee for regulation of navigation and fishing, has said to the Huffington Post that it is most probable, according to the parts of the skeleton, that these are the remains of a large whale from the family of paved whales, which are named after keratin growths.

Scientists believe that the whale has begun to inflate and distort beyond recognition due to decomposition of accumulated gas.

According to the world media, Leonardo’s theory could be considered as believable because Seram Island is located near the routes of whale migration. However, the scientists are still trying to figure out the mysterious creature, and we’ll see what their final verdict will be. 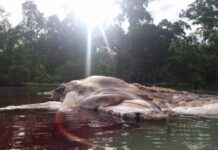