When tech people get together and start discussing Microsoft, the entire conversation somehow always shifts to the Microsoft’s Surface line that is getting more and more popular every day. Since the Surface brand is giving Microsoft more than a good reputation, it is very likely that the company will make way into the smartphone market with this name.

Since the company’s Surface Book and Surface Studio models are getting all the right kind of attention, it is very likely that this will compel the company to get included into making a same premium kind of device in the form of a smartphone. Since these are all predictions and wishes, one thing made us glad recently, and that is when the Microsoft CEO Satya Nadella confirmed that the company already started the production of 2017 Microsoft Surface Phone, together with its partner Pegatron, which was passed by The Gamers Drop.

Thanks to this, tech critics have started their calculations and predictions, and they say that Microsoft Surface Phone will have a huge impact on Apple Inc. and Samsung. Why is this so? Well, the critics explain that this is likely because the Surface models of Microsoft have already acquired a well-known name on the market. There is also an online buzz claiming that the 2017 Microsoft Surface Phone might easily replace Samsung’s Galaxy Note series in terms of usability, at least according to Tom’s Guide.

But now, you probably want some more info and proofs to make you believe that the Microsoft Surface Phone will replace the Galaxy Note, and we will happily oblige. The reason why some think this could happen is that Surface models always come along with the Surface Pen, which is more than useful for artists and professionals that use features like a sketch pad or notepad. What will add upon this are the reports which state that Microsoft made a lot of changes and additions in their Windows 10 anniversary update, which is not a thing that should be neglected. That latest update now comes with a note and sketch-related apps, such as Sticky Pad, Sketchpad and Screen Sketch, which is only a bonus in favor of Microsoft Surface Phone.

Thankfully we also have an opportunity to show you a video of a patent image of how the Surface Phone 2017 will look like. In this video, besides other things, you have an opportunity to see where the headphone-charger port and the Surface Pen are placed, but why write about it when we can let you see the video. Just one more piece of info for the end, Microsoft Surface Phone is speculated to roll out next year, at least according to what Softpedia has learned. Enjoy! 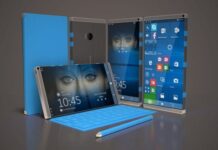 Microsoft Surface Phone Will Not Debut Until 2019