Opptrends 2021
Home Business Mercedes Ahead of Tesla in Electric Truck 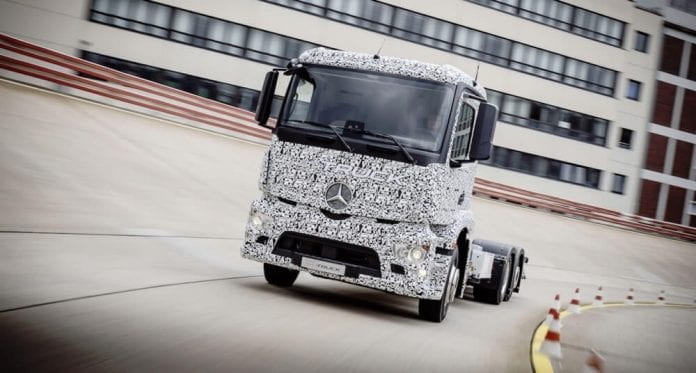 Only a week ago Tesla laid out a master plan to expand the EV industry. Aside from the giant battery factory the automaker is building, it said that it would soon launch an electric bus and electric trucks of different magnitudes. But now, it seems Mercedes beat them to the production of electric trucks.

Few of us knew that the Mercedes-Benz truck division was into the electric trucks. For some years, the department has been working on electric trucks. All seem to be going in line on that side as the company unveiled a concept so realistic that the company would be wasting time if it has not put it in the production stage.

This news is not a huge surprise to truck enthusiasts. Daimler, Mercedes’ parent company, is the world’s largest manufacturer of trucks. Daimler also operates other truck brands including Western Star and Freightliner, both of which are big names in the truck business.

Mercedes-Benz’s latest electric truck concept is the Mercedes Urban eTruck. The truck is designed for urban uses rather than long distances, as the name puts across. The truck, once released, will be convenient for making deliveries around a city or collecting garbage. Like any other electric vehicle, the truck has zero emissions. Therefore, the most obvious benefits include zero environmental and noise pollution.

The Mercedes Urban eTruck resembles an ordinary truck, but it is nothing close to average. A pair of electric motors, located near each rear wheel, powers the Drive. The motors spin the rear axle. The motors recover energy when the truck brakes. The two generate a 737 pound-feet torque and 335 horsepower.

Three lithium-ion batteries modules embedded in the frame of the truck power the motors. The batteries have a combined capacity of 212-kilowatt hours, a capacity enough to cover 124 miles. According to Mercedes, most delivery trucks cover a distance in the range of 124 miles in a day. Fortunately, if you intend to cover more distance, then you can add battery modules in the drive unit.

The charging system of the truck is the Combined Charging System, which uses high voltage direct current a 100-kw charging rate to top up the trucks batteries in 3 hours. Cell companies are developing advanced CCS that could reduce the charging time significantly.

Fuso, a truck brand operated by Daimler, has developed the electric version of the Canter truck. The Canter E-Cell is currently participating in trials in Portugal and Germany. The truck has a 48 kilowatt-hour battery that can last up to 60 miles.

Mercedes was not as generous as to announce the release date of the Urban eTruck, but we are hopeful we will see these trucks on roads shortly.