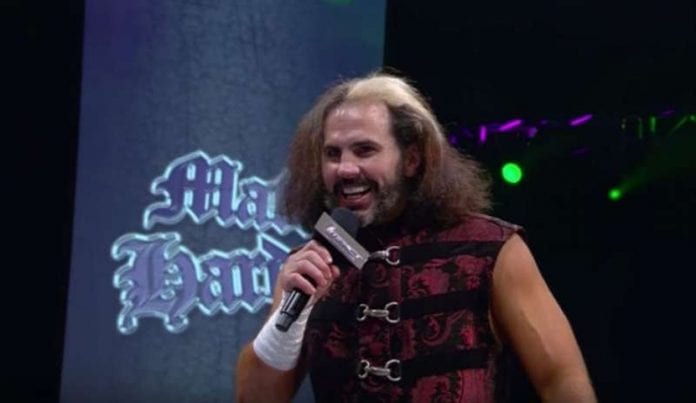 Broken Matt is one of the best characters in the world of wrestling today. There are a lot of gimmicks that were the product of thinking outside the box but rarely do they stay alive. Those are usually of a short life, but Matt Hardy has been able to create something that everybody likes and that nobody has done before. It’s a hard thing to accomplish.

Matt took over the wrestling world and indies with his gimmick, but he was a TNA regular and TNA own. Now, when he and his brother, who also has his new gimmick, are not in the world of Impact wrestling anymore, they might not be able to use their broken gimmicks outside the company. Hardy didn’t use his gimmick during his recent showing in Ring Of Honor, but he continued using it on twitter. Here is Roby Hardy’s explanation on this situation.

“TNA sending ‘spooky’ letter to cable providers threatening to sue if they air Hardys. Trying to screw ROH and ruin wrestling for fans. Hardys just existing and providing for our family, mind you. I think they believe they won our birth certificates at this point. TNA trying to ruin wrestling for all fans out of spite. but contracts are up. You let them expire, remember. You don’t own these boys!”

The message has been sent loud and clear. There is no doubt that Hardys will continue to use their gimmicks, at least outside the WWE. But, many people believe now that they will be in the World Wrestling Entertainment after Wrestlemania and there is a chance that Vince McMahon doesn’t want to take any risks with the Broken gimmick.

The Debut Of Woken Matt Hardy On Monday Night Raw

Is Matt Hardy Happy With His Woken Persona?