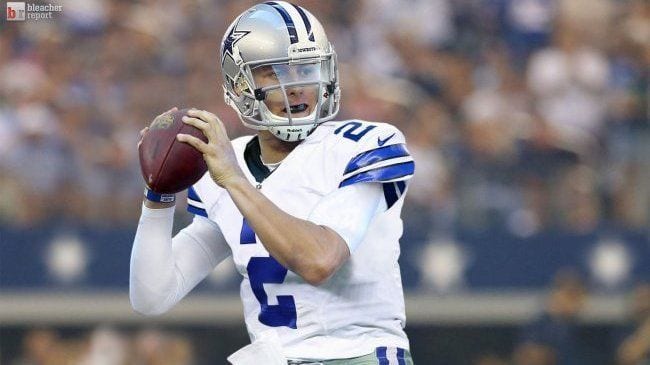 Dallas Cowboys, well namely their owner Jerry Jones, were ready to draft Johnny Manziel in the first round of 2014 NFL Draft. Luckily, that didn’t happen, because after two unsuccessful years he left the league. Now, he is staging a comeback and recently declared that he’s ready to play on the practice squad just to be close to NFL action.

Not so long ago, in 2014 Manziel was close to being a Cowboy. The Heisman winner was on top of Jerry Jones’ wishlist. Unfortunately for Johnny Football the rest of Dallas’s top brass was thinking otherwise. Instead of him, they have picked Notre Dame OL Zack Martin.

Looking at the aftermath of 2014 Draft, Martin now looks like one of the best selections, if not the best. Manziel on the other hand, as we said, is not part of the league. Johnny was the 22nd selection that year and ended up in Cleveland Browns. His tenure there was marked by inconsistent play and off-field issues. His surrounding didn’t help either because Cleveland is the worst place in the league where a QB can end up.

But after weeks and months of substance abuse, and partying Johnny realized that’s not the way he wants to be going. The path that he’s on now is one of redemption. In a recent interview with GM America, he said that he’s clean, sober and that most of his problems are caused by him having a bipolar disorder. A fact that was unknown to him during his NFL career. Now he’s working on being a better man and a better football player. Manziel also believes that he possesses enough quality to be a part of an NFL roster.

Mike Garafolo of NFL network said Manziel was talking to coaches and other teams personnel during NFL Combine in Indianapolis. He’s ready to play for minimal wages without any money guaranteed on a practice squad. This route is Manziel’s best and possibly the only way back to the league.

Dallas Cowboys wanted to spend a pick on him a few years back. Now, they should take a chance on him when he’s costing nothing and is ready to put up a fight to get on a team. A Texas native playing for Texas team, no, for America’s Team could sparkle something within Johnny and make him a respectable figure in NFL circles.

Cowboys have only Cooper Rush an undrafted free agent as a backup quarterback. So, they could actually use Manziel as competition for both Prescott and Rush. Manziel definitely needs Cowboys, but could it be that Big D needs Johnny Football?!