The Making of the Mob is a documentary series which focuses on the emergence of organized crime in the United States in the 20th century. The series was first released in June 2015 on AMC. Season 1 is titled The Making of the Mob: New York as it revolves around various mafia groups in New York City, while Season 2 is set in Chicago.

After the Season 1 release, The Making of the Mob received mixed reviews. AMC renewed the series for Season 2 only two weeks after the premiere, so the second batch of episodes was ready to air the next year, in July 2016. The Making of the Mob: Chicago was somewhat better received, as it has a score of 8.6 out of 10 on IMDb, while on Rotten Tomatoes it holds a rating of 4.5 out of 5.

Produced by Stephen David, The Making of the Mob: New York focuses on New York gangster Lucky Luciano. The story is narrated by Ray Liotta, and it starts with the following introduction: “From the chaos of the New York City streets, rises a legion of visionary gangsters. Vicious killers and criminal geniuses determined to create their own version of the American Dream.”

As for The Making of the Mob: Chicago, it revolves around the iconic Al Capone and his rise in Chicago’s crime mob. The second season was also produced by Stephen David, and it stars Michael Kotsohilis, Paolo Rotondo and Jason Fitch in the main roles.

The Making of the Mob Season 3 Release Date

We are still waiting to hear who will be the focus of the third season of the series. Actually, it has not been confirmed that there will be another sequel, but we believe AMC will renew the show since the first two seasons were well-received by the audience and there are still so many iconic figures in the world of crime that the viewers would definitely like to know more about. It has been speculated that AMC will reveal the news about Season 3 this summer. In case they make an announcement earlier, we’ll let you know. 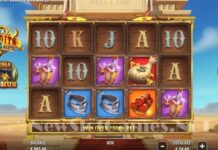 The Most Famous Outlaws in the Video Slots