The stock price of LinkedIn Corporation (NYSE:LNKD) plummeted more than 6% to $148.06 per share as investors selloff their stockholdings in technology companies particularly those so-called momentum stocks.

Over the past five days alone, the stock price of LinkedIn Corp (NYSE:LNKD) declined 17%. The shares of the professional social network company fell more than 23% year-to-date.

Early this month, Prem Watsa, the chairman and chief executive officer of Fairfax Financial Holdings Ltd (TSE:FFH) warned its fellow investors regarding a tech bubble. According to him those who own shares in tech stock including Facebook Inc (NASDAQ:FB), LinkedIn Corp (NYSE:LNKD), Netflix, Inc. (NASDAQ:NFLX), Twitter Inc (NYSE:TWTR), and Yelp Inc (NYSE:YELP) among other will end up hurting. He pointed out that the market valuation of the tech companies he compiled were based on “extra-ordinary speculation.”

Based on his list, Twitter Inc (NASDAQ:TWTR) has the highest price to sales at 38x followed by Yelp Inc (NYSE:YELP) at 27x, Facebook Inc (NASDAQ:FB) 21x, and LinkedIn Corp (NYSE:LNKD) 15x as illustrated below. 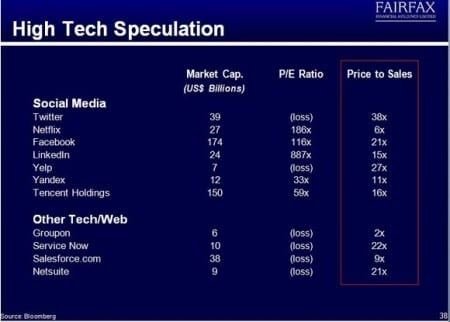 Comments from other investors

Commenting on the trend of the stock prices of tech stocks, Jeff Sica, chief investment officer at Sica Wealth Management told Bloomberg, “They’ve traded strictly on their momentum. Once the momentum is out of the market, these growth stocks are the first ones to get hit.”

On the other hand, Eric Jackson, president of Ironfire Capital opined, “The markets are preparing to adjust to less support by the Fed in the stock market. The place it’s showing up first are in the frothiest parts of the market. Twitter, on a price-to-sales basis, is still amazingly expensive.”

LinkedIn Corp (NYSE:LNKD) is scheduled to release its first quarter earnings results on Thursday, May 1st at 2:00 P.M. Pacific Time.

Earlier this month, the professional social network announced that the total number of its members reached more than 300 million worldwide.

Smartstops.net, an equity risk management firm shows that the shares of LinkedIn Corp (NYSE:LNKD) are currently at an elevated risk state. The firm sent aggressive and conservative exit alerts to investors who own the stock. Those who already exited their positions in the stock when the company entered its elevated risk state last on January 27 saved $66.73 per share. 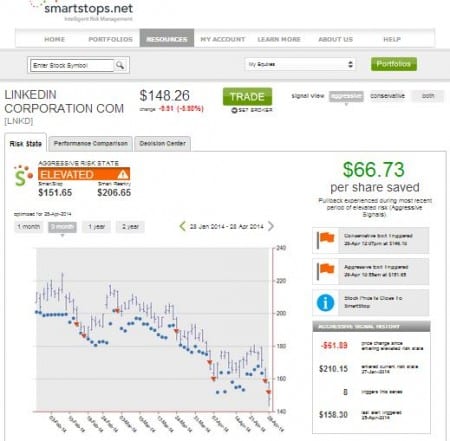 Forget LinkedIn: Gurus Need a Personal Website to Stand Out

Sinobald Abramov - July 6, 2020
0
The internet has become so popular and represented that a lot of people don’t feel the slightest need to go out. Whether it's shopping,...