If you are running a studio for photography reasons or making videos with equipment, you really need to adapt to the changes of the new inventions that come up in that field. There are many studios and depending on the service that you offer, whether is that only taking pictures, or you are filming certain manifestations people might find better solutions if you lack something. You have to be sure that you are better than the other options so you can have your place secured, especially in a certain area.

Lightning is one of the most important things when it comes to taking photos with great quality, filming something, or whatever you do involve a camera. There has to be enough of it, so the photo comes up with great detail. Of course, there are many styles that people can choose from when they are taking a photo of them. Some of them like darker photos, but still, you will have to point a source of light on them to make a difference and a spotlight so the picture comes up looking great.

When we talk about lightning, there are multiple sources that you can use. In the past were used regular bulbs with a reflective material surrounding them, now LEDs are becoming more popular, and in this article, we will talk about why LEDs (and LED COB lights) is a good option for your studio photography.

You can use it to create ambient with many colors

Regular bulbs come only in one color. However, LEDs, especially bi color LED and LED COB have a lot more versatility and you can use those lights to create a better ambient.

For example, there are primary choices of lights that are meant for daylight and one for the night. Each has a different tone that you may not be able to differ, but you can notice it when you take the same photo with the two options. That way, having a better tone will give you better results and it will make things easier in the end when you have to edit them.

Another option that you might consider is using led lights that project many colors. That way, you will be able to take photos that are in a different color. For example, depending on your project, you might have to take a photo with blue lighting as an ambient, or any other color. Using this option, you will be more flexible and you can take more photos and extend your creative process.

Sometimes, you are in need to control everything manually so you can come up with the product that you really like. When you are using the light from the camera, it shines only when you take the photo, so you will have to do many photos until you come up with the one that both you and your client like. Sure, the light from the flash is strong, but you will have to make more shots. Instead, you can use the LED lighting and have the panel set up with the light that you are satisfied with, and you can take more photos and choose the best one easier.

Many of these panels come with the option of making them brighter or making them shine less. They can be pretty bright and you have an impression like that because there are many small sources next to each other. If you are looking at just one, it shines less than a regular bulb, but when you have them combined, it is way better and more controlled.

Which LED option to choose

There are a few technologies that are using the LED lights, but the best one and the one that you should use for lighting your studio is the COB option as suggested by Colbor. They are brighter, and you will be able to have the same results with a few of them compared to more outdated LED lighting. They are more reliable than the others so they will last longer and you will be able to work without obstructions. In addition, they are more compact than the others, so you will also save space for the same work done.

This is a feature that is really important because when the work takes place in a close environment it can get pretty warm inside and it can be uncomfortable both for the people who are getting photographed, and the artist as well if you are using a standard bulb. You can’t really focus when you have to battle with hot conditions, you are focusing on how you can’t stand this much heat rather than thinking about what to do professionally. Also, you will not be able to catch certain positions because the person who is posing can have his clothes wet, or their makeup might get ruined because of that.

Other than making uncomfortable conditions, the regular bulbs are dangerous to be put next to something that might get on fire. You will really have to be careful and you might not get the position that you wanted because of security reasons. That is why an LED continuous lighting is a great choice, it does not get hot, and you can place it wherever you want because it will do no harm. Also, they don’t make the studio like a sauna, and you will have a better working process.

You can switch to recording

This is something that may bother a lot of people when they are using the flash. It gets on just when you take a photo and then it turns off. That means that if you switch to recording you will capture a dark video where nothing is seen. Instead, using a LED continuous lighting, it can stay on for how long you want and you can constantly switch between taking pictures and recording a video.

They are more efficient

Other than the benefits they offer for the working process, they are also great in a financial aspect. They are using less energy than the bulbs that were used previously so you will be able to save something on that. In addition, they last longer so you will not have to change them that often and you will be able to work constantly without thinking about that. 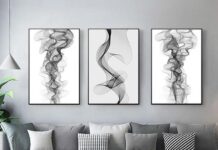 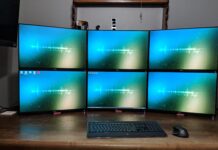 8 Cool Ideas for your 6 Monitor Setup