LaVar Ball is a businessman and media personality who is a founder and CEO of sports company Big Baller Brand. He was born on October 23rd, 1967. After he appeared on TV in 2017 and made some bold statements, he became a frequent guest on television and did interviews with different media houses. Because of this people became interested and wanted to know: What is LaVar Ball net worth?

LaVar Ball is more known as the father of Lonzo, LiAngelo, and LaMelo Ball than for his own actions. The outspoken and controversial father of three became famous after launching his own sports brand, and after his son, Lonzo signed with Los Angeles Lakers. After that happened, he became a frequent guest at Lakers games and is known for his loud-mouth interviews.

In one of his most recent outbursts, he even criticized LA Lakers head coach Luke Walton, and the way they are coaching his son: “They’re soft. They don’t know how to coach my son. I know how to coach him. I tell him to go get the victory. Stop messing around.”

His influence is ever-growing, and it became big enough that LA Lakers president of basketball operations and NBA Hall of Famer Magic Johnson and general manager Rob Pelinka had to arrange a meeting with him in order to talk about his media comments. The conversation was about creating a positive atmosphere around and within Lakers organization.

This prompted a new interview with ESPN in which LaVar stated: ‘It was the best thing, man. Everybody’s going to try to make it an ego thing, like I’m trying to tell them what to do or they’re trying to tell me to tone it down. It’s not about that. It’s about coming together and to get a solution to this problem.’

LaVar Ball net worth is approximately $4 million, and this is mostly thanks to his Big Baller Brand sports equipment company of which he is founder and CEO. But, these days he is looking to expand his fortune through his son Lonzo Ball who is already an NBA star playing for LA Lakers. With time more and more basketball superstars will buy his branded shoes and his wealth will only increase.

In his youth, LaVar Ball played American football with the London Monarchs of the World League of American Football and was a member of practice squads in Carolina and New York with Panthers and Jets. Before football, he played college basketball.

In one of his best interviews, he said that he could beat Michael Jordan in basketball one-on-one. Another gem came with a statement that his son Lonzo Ball is better than Stephen Curry.

What do you say, does LaVar Ball net worth surprise you? 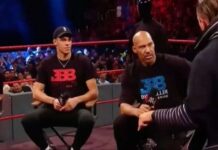 What Does The Miz Think About LaVar Ball Segment On Raw? 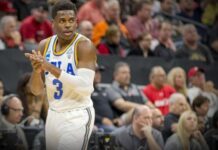