Speaking to the reporters during the NFL Combine in Indianapolis, Dallas Cowboys owner Jerry Jones said that he wants Dez Bryant on the Cowboys roster in 2018.

He was quoted saying: “As I sit here, do we want him on the team next year? The answer is yes.”

But in order for Dez to stay in Dallas, his contract will need some restructuring. And, not only that he will need to take a pay cut. Terms of his current deal guarantee him $12.5 million with $16.5 million salary cap hit. Cowboys vice-president Stephen Jones said earlier that the contract, as it is now, needs to be addressed.

His father Jerry added: “We’re not in any way off the page within the organization.”

Older of the Jones’s continued by saying that there’s no decision made on their No1 receiver. But, he also stated that the talks between two parties would happen in the immediate future. If Dallas franchise wants to have more freedom in free agency, they will have to do something with Bryant’s contract. 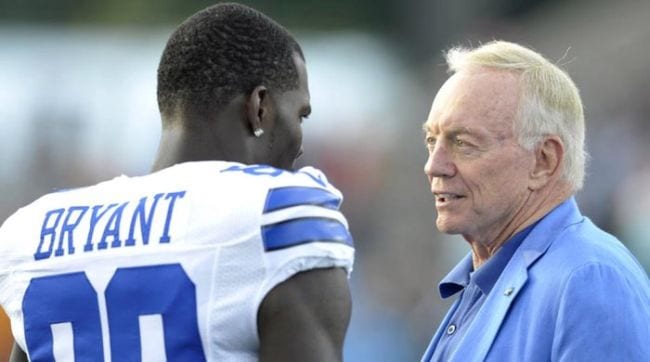 In a recent interview former Oklahoma State WR repeated that a pay cut is not an option for him. Stephen Jones, on the other hand, was adamant that the only way Dez remains in Dallas is by lowering his wages. If Cowboys decide to cut him as a post-June 1st release, they will save $12.5 million but will still have $4 million of dead money against the cap in 2019.

Despite his contract dispute, Bryant is still considered a No1 receiver by Jerry Jones. When asked why are they trying to renegotiate his contract if he’s still their first option Jones said: “We have addressed guys in the prime of their careers’ contract[s] before. We have made adjustments in their contracts. We continue to look for ways to improve your value on your roster. But Dez has a history with me on the Cowboys of working with his money. He is not the only one that that’s happened.”

So, it seems clear, Dez Bryant has a chance to stay Dallas Cowboys’ No1 wide receiver, but on Jerry and Stephen Jones’s terms.