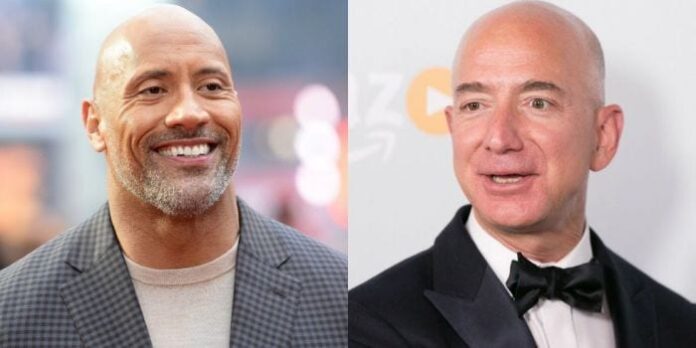 Dwayne Johnson has fans all around the world. Not just regular people, The Rock has fans among celebrities and world’s wealthiest people. One of them is Jeff Bezos, Amazon CEO.

The man that has the title of ‘world’s richest human,’ Bezos is a fan of People’s Champ and even found the time to go and see his latest project Rampage. After the projection, he even had time to praise Hollywood’s best-paid actor and his latest action-adventure gorilla-fueled blockbuster.

Talking about Rampage, Jeff Bezos said on Twitter: “I love Dwayne Johnson… Still working on my smolder.” Here, Bezos was talking about Johnson character from his most recent box office hit Jumanji: Welcome To The Jungle, Smolder Bravestone.

What followed was Johnson’s response as he’s known for his interaction with fans on the social networks, and Bezos is certainly one of them. The Rock responded with: “Haha brother the love and admiration is mutual. Mahalo to you and the kids for seeing RAMPAGE. Drinks and dinner on me one day soon please. And kindly walk into your next shareholder’s [meeting] with that bad ass smolder.”

Haha brother the love and admiration is mutual. Mahalo to you and the kids for seeing RAMPAGE. Drinks and dinner on me one day soon please.
And kindly walk into your next shareholder’s mtg with that bad ass smolder 🤨👊🏾 https://t.co/M0OYiQjha3

In the era of social networks, it’s not strange seeing two bald super-rich guys exchanging pleasantries on Twitter. The fans immediately started thinking about the possibility of Jeff Bezos staring in Rampage 2. They even have a title for the sequel. It’s Rampage 2: Amazon Primate. This remains a fan fiction, but what could actually happen is that these two hold a workout session together.

Dwayne Johnson is already established as big, bald, muscle macho man of Hollywood, and Bezos could follow his path. How? You probably didn’t see photos of his biceps, which is surprisingly big. The internet didn’t fail to notice this, and in addition to Rampage 2, Bezos also has a shot at featuring in Fast & Furious with Johnson and Vin Diesel. At least Internet thinks so.

Anyway, the CEO of Amazon is so wealthy, that he could probably launch his own franchise, in which he could hit a giant monster of his choice in the face and be the hero of the day. Why not?!

82% Of Online Shoppers Are Focused On Price