Streaming giant, Netflix, Inc. (NASDAQ:NFLX) recently announced that a deal with cable provider, Comcast Corporation (NASDAQ:CMCSA) that will allow Netflix to gain faster speeds and more reliable streaming services to its customers.  In essence, with Netflix connecting its content to Comcast’s network, streamers of the service will have a faster and more reliable connection, as the connection gets rid of a “middle layer, speeding the video to the end-user”.  Thus far, investors seem to have welcomed the partnership as a “win-win”.  Comcast will generate extra revenue by offering its network for connect ability and Netflix will offer their streaming services through a more reliable and quick network.

This new upgrade comes after Netflix customers have complained over quality concerns in recent times. However, the Federal Communications Commission is investigating claims that Comcast may have been putting Netflix on slower networks to help boost appeal from its On-Demand services.  According to the Guardian, “Recent studies, however, have shown that Comcast users were receiving their Netflix media at significantly slower speeds than those using other internet service providers”.  This interesting claim has lead the US Justice Department and FCC to say that they will continue to monitor speeds and any signs of customers being ripped off.

The bottom line here is that after Comcast announced its plan to purchase Time Warner Cable for $45 billion, federal regulators have been on Comcast and it is speculated that the cable provider will have a hard time selling the merger of the largest and second largest cable providers merging as legal.  This deal quiets all the talk of providing slower network speeds in order to make its services more appealing, and Netflix gets a faster speed and more reliable network for its services.

Being that this is big news for both firms, Netflix may be getting a much-needed boost of confidence and support from its customers.  This will allow Netflix to continue working on its operations and expanding its offerings, while having the knowledge that their network with Comcast can handle the load and viewing capability.   Now one has to wonder if deals with Verizon (NYSE:VZ) and AT&T (NYSE:T) might be next?  On Monday,  Verizon Communications’ chief executive said he expects Netflix will pay the telecom company for faster speeds after Netflix customers complained about slow connections to Verizon’s FiOS service.   And an AT&T spokesman Mark Siegel said in a statement on Monday that “we’re in discussions with Netflix to establish a more direct connection between our networks, similar to agreements we have with others, so that AT&T broadband customers who use Netflix can enjoy an even better video experience.”

All good developments for the end consumer.  Netflix however as an investment has been shown to be volatile.  Thus  investors need to be aware of  elevated risk states that may come along for Netflix and protect their profits.  For instance in the most recent downturn of NFLX, investors lost over $32 a share.  That is why a risk management service,  SmartStops.net  will alerts investors to periods of higher risk for their stock holdings.  In fact in 2011, SmartStops saved its subscribers over $200 a share. 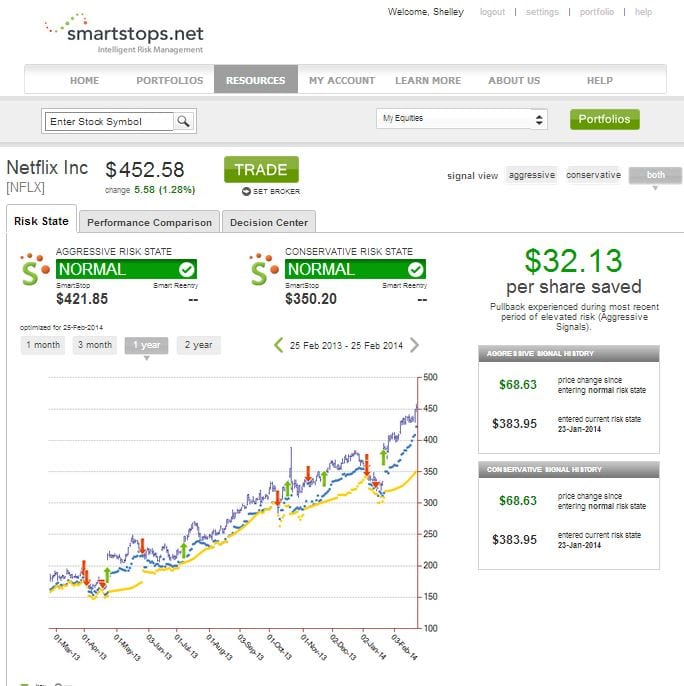 In the end, Netflix is making an important move to stabilize its network and appease customers who have been complaining about the constant buffering throughout the tv show/movie.  Additionally, this provides an opportunity for Comcast to raise funds and focus on its merger showdown with the justice department.  Ultimately, this is good news for both sides and customers need not worry about extra costs or higher fees.  Now can Netflix build on this success to help drive subscriber growth?