Opptrends 2022
Home Sport Is Jinder Mahal Done As The Champion After His SD Live Promo?

Jinder Mahal has been the WWE Champion for the majority of 2017. It is still weird to see the belt around his waist and him as the champion. That speaks a lot about his title reign and how the company has failed to build him up as a legit champion. Right now, there are a lot of fans that are calling for him to lose the belt. Against all the odds, he has become the champ and has been able to retain the title for a really long time.

Now, he is feuding with Shinsuke Nakamura for the championship and has had a really weird promo on him as he was calling out the way he looks and has even brought some race issues into the occasion. It all caused the fans to chant “that’s too far” to him because he was talking that way about Nakamura, even comparing him to Mr. Myagi.

Everybody knows that Nakamura is probably going to be the one to take the title away from Jinder as he is just way too big of a star on the WWE roster for Jinder to overcome. But, it seems that this promo might have put the nail in the coffin for the reign champion.

The fact that WWE didn’t put this segment on their Youtube page speaks a lot about how they feel about him cutting his promo. After all, the major talk backstage was about the fact that the Arena in which Smackdown Live took place this Tuesday was only 30% to 40% full. Jinder has a lot to do with that as he is the top guy on the brand that people just don’t want to come and watch. All of this probably means that Nakamura will become the WWE champion at Hell in a Cell. It is the right call to make in this situation. 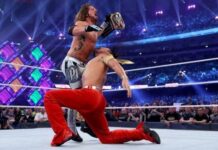