One of the best remaining free agents on the market is visiting the NFL champions. Future Hall of Fame running back Adrian Peterson is traveling to Foxboro in order to meet with the Super Bowl champion the New England Patriots. The running back has already talked with some teams, but he is still without a home. Is New England a good fit for him?

It seems that AP won’t be getting as much money as he probably thought that he would as a free agent. He is going to have to settle for less somewhere as the running backs are not hot on the free agent market, especially with the young studs that are in the draft. Peterson is now not thinking about the money as he is going to get a similar offer from every squad. He is now looking for a team that is going to compete for the ring. When you look at those with potential like that, there is nobody better to pick than the New England Patriots.

From his standpoint, it is a perfect fit. We have to say that if someone is to say no to this deal, it is the New England Patriots. They already have James White and Dion Lewis as two great RBs that can run with the ball and catch passes from Brady. They added Burkhead, a guy who played for Cincy last year, which makes him the third back that they have. Do they really need to add Peterson at this point?

If they do, it’s going to be great for them as they are getting another great player and are solidifying their top spot. On the other hand, if they do not get him, they can live with it. 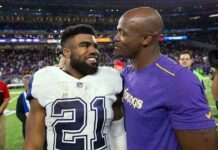 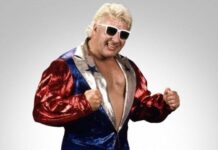 Wrestling Champion Johnny Valiant Dies After Getting Hit By The Truck 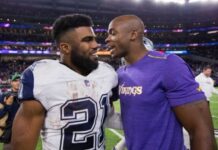 The Time Is Right For Cowboys To Sign Adrian Peterson