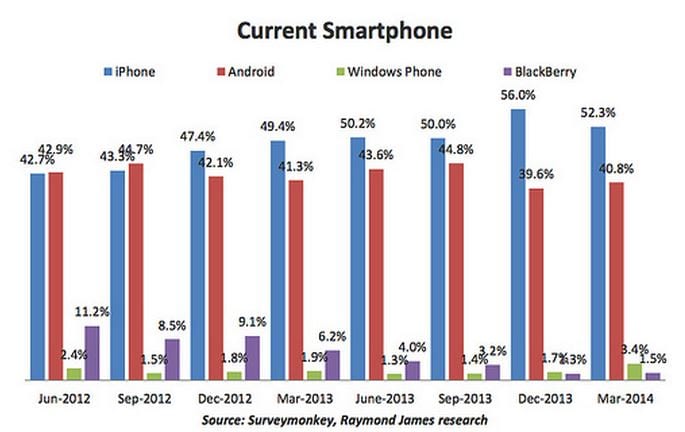 The market share of the iPhone and Android smartphones in the United States are stabilizing, according to Tavis McCourt, an analyst at Raymond James based on a survey participated by 500 respondents on March 13-17. The number of iPhone users in USA was declining compared to Android users.

McCourt has an Outperform rating for the shares of Apple Inc. (NASDAQ:AAPL) and Google Inc (NASDAQ:GOOG).

According to the analyst, the number of iPhones users declined from 56% to 52.3% quarter over quarter, but it is still higher than the 49.9% a year earlier. McCourt suggested that the iPhone’s U.S. market share will remain stable at more than 50%.

On the other hand, the number of respondents who own Android devices increased from 39.6% in the previous quarter to 40.8% this March quarter.

The result of the survey showed that 49.7% of the respondents plan to buy an iPhone as their next smartphone. According to McCourt, the percentage of purchase intent for Apple Inc.’s (NASDAQ:AAPL) iPhones is below the 50% to 55% range on record since he started conducting the survey in June last year.

McCourt also maintained his conviction that there is a strong interest for a larger screen iPhone. According to him, 33% of iPhone users are willing to pay additional $100 for a new iPhone with a larger screen, up from 26% in the previous survey.

According to the analyst, the pricing choice of Apple Inc. (NASDAQ:AAPL) for the iPhone will be interesting because of speculations that the device will sport a bigger screen. McCourt find it equally interesting that only 6% of Android smartphone users are willing to pay a $100 premium for a bigger-screen iPhone. According to him, the iPhone 6 might improve upgrade rates for the company, but it will not have a significant impact to its subscriber base.

McCourt noted that the purchase interest for Android devices increased to its highest level at 44.4% this quarter. The percentage was above its normal range at 38% to 42% since the survey started. According to him, Samsung Electronics Co. Ltd. (KRX:005935) is benefiting from iPhone users dumping their iPhones. 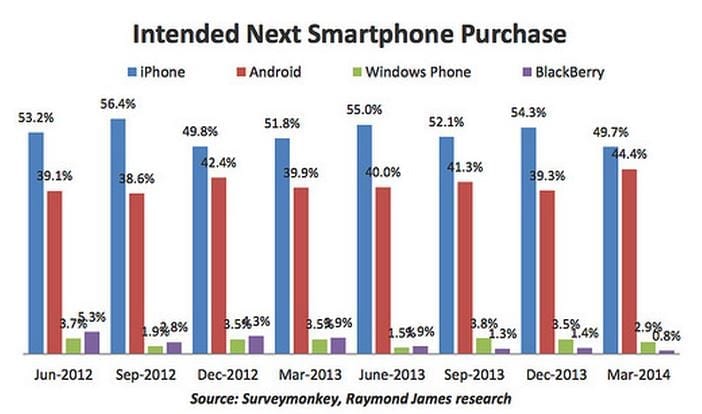 He observed that 49% of Android users who participated in the survey own a Samsung Galaxy smartphone. The percentage rose from 43% in the previous quarter. McCourt found that 57% of Android users plan to purchase a Galaxy as their next smartphone, an indication that Samsung Electronics Co. Ltd. (KRX:005935) will continue to gain market share within the Android ecosystem.