International Business Machines Corp (NYSE:IBM) started reducing its workforce in the United States to meet its $20 adjusted earnings per share target in 2015. The workforce reduction is part of the company’s $1 billion restructuring plan as it adjusts its business operations to the changes in the technology industry, according to report from Bloomberg.

In 2011, he stepped down from his position. He was succeeded by the current CEO Ginni Rometty and inherited the $20 earnings per share target by 2015. Achieving the target is challenging for Rometty given the fact that International Business Machines Corp (NYSE:IBM) has been experience declining revenue over the past seven consecutive quarters.

Rometty implemented different strategies to meet IBM’s earnings target such as selling assets, terminating employees, cutting tax rates, and repurchasing shares. She is also restructuring the company’s business to meet the changing trends in the technology industry. Instead of using servers, its clients are shifting towards storing data and applications offsite or in the cloud.

[email protected], an employee’s union said the company cut jobs in its offices in Iowa, Minnesota, Missouri, New York, North Carolina, and Oklahoma yesterday. For the first in 10 years, the workforce of International Business Machines Corp (NYSE:IBM) declined by 7% to 431,212.

The employee’s union stated that the company also started terminating its workers in Asia, Europe, and South America this year. Earlier this month, Toni Sacconaghi, analyst at Sanford C. Bernstein & Co. suggested that International Business Machines Corp’s (NYSE:IBM) could cut as much as 13,000 jobs worldwide. [email protected] estimated that the company could fire as much as 15,000 employees worldwide this year.

The UNI Global Union and the UNI IBM Alliance condemned the mass layoffs of the company, and emphasized that its employees are still its biggest and should be in the forefront of change. The unions said, “Alternatives to layoffs exist for companies looking to cut costs. Retraining programs can yield positive results for both employees and the company, and have been implemented successfully in numerous companies.”

On the other hand, International Business Machines Corp (NYSE:IBM) explained in a statement that it “continues to rebalance its workforce to meet the changing requirements of its clients and to pioneer new, high-value segments of the IT Industry. The company added that its growth units including its cloud business and nanotechnology have more than 3,000 job openings at given period.

Last month, International Business Machines Corp (NYSE:IBM) sold its low-end service business unit to Lenovo Group Limited (ADR) (OTCMKTS:LNVGY) for $2.3 billion as part of its strategy in shifting its business into the new trends in technology such as cloud services and data analytics. The company expects to send 7,000 workers to Lenovo as part of the transaction.

Stock market risk management firm, Smartstops.net show that the shares of International Business Machines Corp (NYSE:IBM) are at an elevated risk level. The stock entered its current risk state last January 22. Investors who decided to protect their investment from the company when they received an exit trigger from the risk management firm saved $9.86 per share. 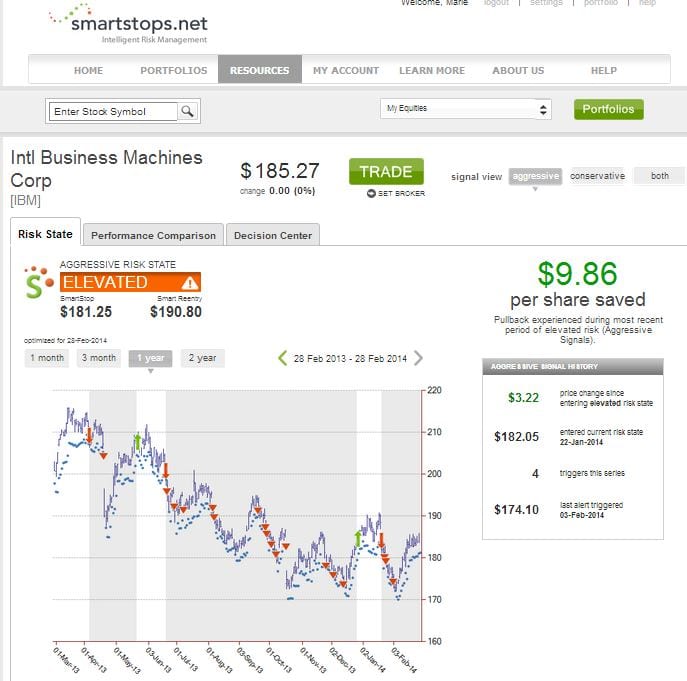 IBM Will Use Macs Instead of PCs