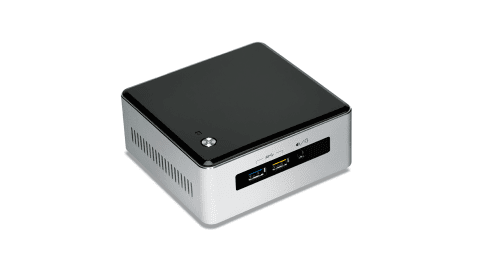 Created much on the lines of Core i5 Broadwell NUC, Intel Corporation (NASDAQ:INTC)’s latest NUC offering that stores its Core i7 chips is the fastest desktop that has a solid driver support. However, there is a marginal difference in between Core i5 NUC and i7 NUC.

The most predominant variation is that Core i7 NUC comes with faster CPU and GPU and is priced $100 higher than the predecessor. As per Intel Corporation (NASDAQ:INTC), Core i7 NUC will be available for $500 in the market.

The Core i7 has the same motherboard as Core i5 NUC while there are two slots for DDR3 RAM and one for M.2 slot. In total, i7 NUC has four USB 3.0 ports, one of which to be used for charging the device. The other three ports consist of mini HDMI and mini Display port, gigabit Ethernet and a Bluetooth adapter.

The difference between Core i5 and Core i7 is that while the former was offered either in short case or taller case, the latter mandatorily comes in taller case, providing room to store SATA data and power cables. Moreover, one can populate the caddy drive with either an HDD or an SSD. When using an SATA drive in the M.2 slot one can RAID both of them together for extra speed or redundancy.

At the same time, Intel Corporation (NASDAQ:INTC)’s Broadwell NUCs comes with the option of replaceable lids, to serve either functional or aesthetic purposes. Some of the functional additional that can be made are wireless charging pads, NFC or TV tuners though none of which were available in the markets.

Another interesting feature is that Intel Corporation (NASDAQ:INTC) will allow a user to print a customized lid using a 3D printer. Overall, Core i7 offers better speed than Core i5 version and makes more sense to users, who have gaming or CPU performance in mind.