Intel Corporation (NASDAQ:INTC) announced that it will change its financial reporting structure starting with its first quarter earnings report, which will be published on Tuesday, April 15.

According to world’s largest chip maker, it will revise the presentation of its operating segments to reflect the changes in its organizational model, which are aligned with its critical objectives. Brian Krzanich, chief executive officer of Intel Corporation (NASDAQ:INTC) is leading the company into a new generation by shifting the company faster towards mobile, and getting its chips into wearable devices and other products that falls under the so called “Internet of Things.”

Intel Corporation (NASDAQ:INTC) said its PC Client Group (PCG) will include the results of its gateway and set-top business unit, which were previously included under the Service provider Group within the Intel architecture (IA) operating segments.

The chip maker will report the communications infrastructure portion of its Intelligent Systems Group under the Data Center Group (DCG).  Its Mobile Communications Group (MCG) will be composed of its phone group, tablet group, and multi-comm, which were previously reported under the IA operating segments.

Intel Corporation (NASDAQ:INTC) will show the removal of Wind River. McAfee, Inc. (McAfee), and its solution group will remain under its Software and Services Operating Segment.

The chip maker created a new segment called Internet of Things Group (IOTG) will include the embedded portion of the Intelligent Systems Group and Wind River Service Group. Intel Corporation (NASDAQ:INTC) said All Other will comprise the remaining components of the Other IA operating segments particularly New Devices Group and Netbook Group as well as Non-Volatile Memory (NVM) and Corporate.

Separately, the shares of Intel Corporation (NASDAQ:INTC) was upgraded to Outperform rating with a $31 price target by Michael McConnell, an analyst at Pacific Crest Securities. He explained that the upgrade was due to signs of improvement in corporate personal computers (PC) demand, which offsets the weakness in the consumer PC market.

McConnell also believed that the upcoming Grantley server platform of the chip maker will re-accelerate spending at traditional IT consumers and will likely drive its Data Center Group business (22% of company sales, ~40% of operating profit) in 2015.

The stock price of Intel Corporation (NASDAQ:INTC) climbed 1.24% to $26.49 per share today.  Smartsops.net, a stock market risk management firm shows that the equities of the chip maker are currently at a normal risk level. The stock most recent elevated risk was in February 5, when the price declined to $23.51 per share. At the time, investors who pulled back their investment after receiving risk alerts from the firm saved $2.15 per share. 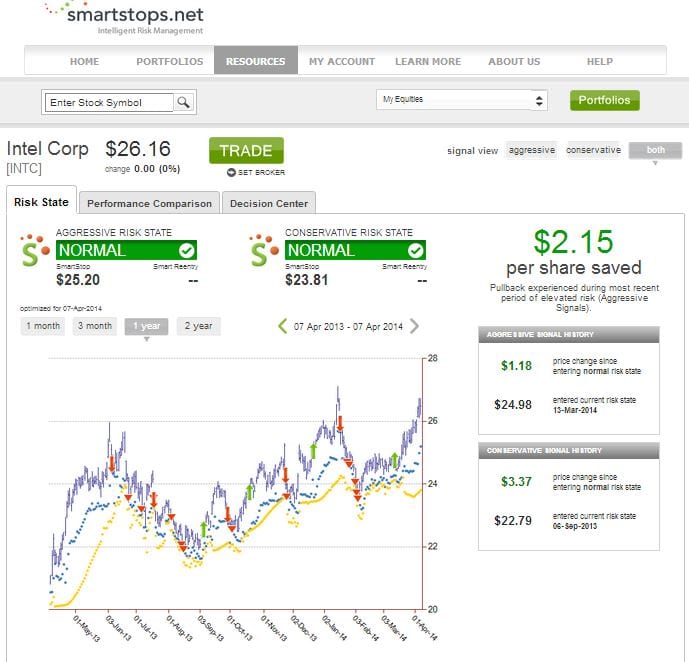