Railways and roads closed following the devastating Hurricane Ophelia! Thousands were left without shelter as the storm marches on towards Wales!

Even though its strength weakened during its trip from the Azores, this is still a dangerous storm.

According to BBC Weather, it recorded a gust of 90mph (145 km/h) in Aberdaron, Gwynedd.

A woman was injured after being struck by a falling branch in Wrexham.

A ‘be prepared’ warning was issued in Anglesey, Gwynedd, Pembrokeshire, Carmarthenshire, Ceredigion, Conwy and Denbighshire until 23:00 BST.

When it comes to Wales, a yellow ‘be aware’ warning was issued in various parts until 23:55.

Flying debris, such as tiles blown from roofs, and large waves around coastal areas could cause injuries or endanger people’s lives warned the Met Office.

The M4 Briton Ferry Bridge in Neath Port Talbot was closed due to strong winds! North Wales Police warned motorists in Gwynedd and Anglesey not to travel unless they really need to.

The Police also stated how their control room was ‘extremely busy’ due to more than 60 disruptions all caused by the weather.

Few roads leading to the A55 in Conwy were also closed.

The Britannia Bridge between Gwynedd and Anglesey was closed but later reopened to small vans and cars.

The Cleddau Bridge (Pembrokeshire) was shut, but it is now open for cars. On the other hand, the council closed numerous roads because of fallen trees.

A number of secondary roads will be closed overnight due to fallen trees according to Ceredigion council.

The council also warned people to stay away from Aberystwyth seafront and Aberaeron, where flood warnings are in place due to dangerously high tides.

Stena Line and Irish Ferries crossings between Wales and Ireland were both canceled from Pembroke, Holyhead and Fishguard.

The water forced open the lock gates, and part of one of them could be seen floating in the sea at Milford Marina, in Milford Haven, Pembrokeshire.

Arriva Trains Wales warned of disruption as some trains will have to run at reduced speeds! There may even be delays or changes at short notice, the company stated.

Passengers are advised to check before they travel.

Twelve flights have been canceled at Cardiff Airport. The management and representatives stated that more flights might suffer delays.

Bangor University and Aberystwyth University are closed for the afternoon. Besides these universities, all schools in Anglesey and Pembrokeshire closed early along with some in Gwynedd.

There are power delivery cuts in Carmarthenshire, Ceredigion and Pembrokeshire, with more than 7,000 properties affected according to Western Power. Western Power had to deal with 18 high voltage faults at one point.

Scottish Power, covering Gwynedd and Anglesey, said that on Monday night about 5,000 homes were without power.

There has also been a ‘selfies’ issue! People have been warned not to go near shorelines to take selfies.

Holyhead Coastguard stated that the road at Treaddur Bay was closed to stop people getting to the shore.

‘We would advise anyone to stay away from the edge, stick to paths and look out for safety signs,’ said James Boulter, from the RNLI lifeboat station in Mumbles, Swansea.

‘Do not go too close trying to get that elusive picture or selfie. It really isn’t worth it.’

A rescue boat was sent out to Poppit Sands in Cardigan Bay after a group of six people, including children, were seen in the water on Monday morning.

‘Conditions in the sea and even on the beach itself were horrendous and while they were well equipped, to even think of going out in this was just madness’ said an RNLI spokesman. 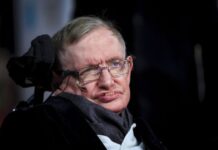 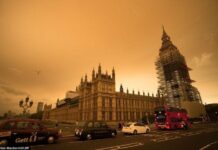 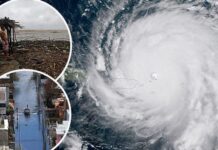