Florida has been hit by Hurricane Irma, and the state is still recovering from the inflicted damage, but another storm threatens the continental United States. It is called Hurricane Maria, and according to reports, the storm will likely follow Jose’s path, avoiding a direct hit on the East Coast.

Maria is a major storm which is between Categories 4 and 5 is expected to spin north and then east, according to AccuWeather senior meteorologist Rob Miller. Determining the exact path of Maria is too early, but it should avoid the continental United States, confirmed Miller.

“It seems at this point that the most likely track for Maria would be similar to Jose, staying off the coast but maybe close enough to clip the Outer Banks, maybe New England,” he said. Speaking of Hurricane Jose, it continued to spin south of New England on Tuesday. The good thing is that it could guide Maria away from the United States.

Weather Underground meteorologist Bob Henson predicts that Jose will weaken a large ridge of high pressure which sits over the eastern US and most of the Atlantic. This area of high pressure causes warm and humid weather over eastern and central United States, explains AccuWeather. Meanwhile, Henson said: “There is strong agreement among our best track models that Maria will be following in the footsteps of Hurricane Jose.”

If Jose hadn’t been formed, that high-pressure area we have mentioned above would have turned into a sprawling ridge and Maria would follow the footsteps of Irma, causing extensive damage to Florida, which is already too vulnerable. Henson added that west-to-east flow in the Jetstream will push Maria out to the sea. On Tuesday afternoon, Jose kept its Category 1 status with 75-mph strong winds causing damage along the east coast.

Florida, Georgia and South Carolina are hoping that Maria would follow Jose on a similar path since the states are still recovering after being smashed by Hurricane Irma. “We don’t want to let our guard down,” Miller said. “But the consensus is that the storm keeps off the coast, maybe significantly off the coast.” 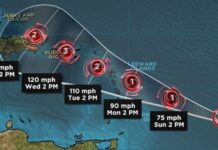 Tropical storm Maria turned into a hurricane, and in next few days it is expected to strengthen even more! 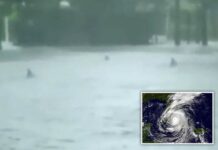 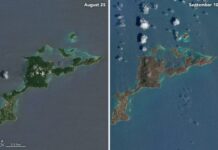 Carribbean are no longer green after Hurricane Irma