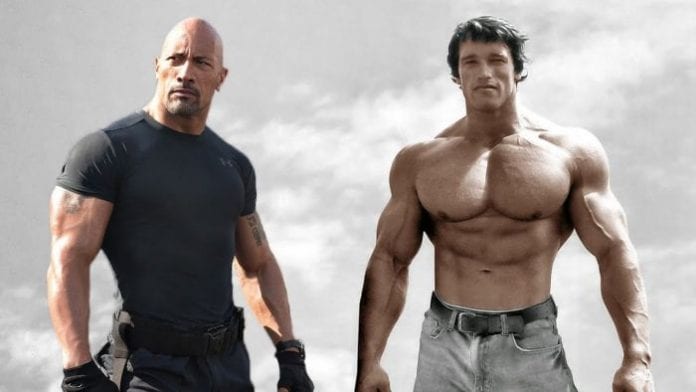 Dwayne Johnson’s latest project Rampage hits theaters this week. It is his 21st film in the last decade. If you don’t believe us, check it out yourself. Over the previous ten years, he became Hollywood’s best-paid actor.

It was a destiny for him to reach the summit of action movies industry. If you can recall 15 years ago, he was passed the torch of ‘world’s biggest action star’ by Arnold Schwarzenegger. The former Mr. Olympia made a cameo in Johnson’s movie called The Rundown. In the scene they share, Arnold passes by Dwayne and tells him: ”Have Fun!” This implied that The Rock is now, or is going to be Hollywood’s most prominent action star.

It’s no wonder that Schwarzenegger passed the torch to Johnson. There are many similarities between the two. Muscles, for one. They both achieved fantastic success in the movie industry. Johnson is an action star, but he also appeared in comedies. To his name he has Fast & Furious and San Andreas, but also The Tooth Fairy and Central Intelligence. Back in his heyday Arnold also mixed action and comedy with a classics such as Predator and Terminator and comedies Twins and Kindergarten Cop.

But unlike the Austrian bodybuilder, Brahman Bull did dramas such as Gridiron Gang and Southland Tales. He also had misfired with projects such as Doom and Hercules, but his fame and fortune are cemented. His popularity with the fan base is unparalleled by any other celebrity. Did you hear of ‘The Rock for President’ chants? Of course, you did. They are getting louder by the day.

The political climate in the U.S. that made Donald Trump a President favors Johnson to win the elections if he decides to run for office. His Hollywood adventures are only starting so we don’t believe that he is going to run any time now. But, if he did it would be similar to what Schwarzenegger did. Arnold was the Governor of California on two terms. Prior to Johnson, another actor became president – Ronald Reagan.

Before that, there are peaks in Hollywood he needs to conquer. Will he ever win an Oscar? He could, why not, but it’s not likely. At least not at this moment. What he could do is to become greatest action star of all time, not just of the last decade. That, he could achieve!

Richard Orland - May 13, 2021 0
Every profession evolves rapidly today. Thus, experts who want to stay afloat and be demanded on the labor market have to improve their skills...

4 Ways To Tell If a Craft Beer is Authentic

How technology is improving the way we play online casino games

Things to Consider When Choosing an Orthodontist