Opptrends 2020
Home Politics Why Houston’s flooding got so bad, according to storm experts
752
SHARES
ShareTweetGoogle +Pinterest

Houston, Texas is still in trouble as this fourth-largest city in the US is still affected by catastrophic and life-threatening floods.

Harvey managed to broke all records when it comes to the amount of rain it delivered since four feet of rain has fallen. A large number of people needed help and were rescued from their flooding homes. Rescue missions are still conducted, and roadways that are now rivers certainly don’t make things easier. People from all over the US came to help with their boats, and National Guard is on the field engaged in search and rescue missions. Level of destruction is incredible and according to some reports about 30,000 people will seek shelter while a total of 450,000 people from those areas will need some kind of federal disaster aid. This is yet another disaster that will be felt for years, and it will take a lot of time to clean everything up and return to the previous state. At this moment we have info that at least 11 people died during this unfortunate event but officials fear that the number might not be final.

One of the fellow reporters did a research why did this storm had such a devastating effect. For that, he consulted Phil Bedient, leader of a research group from Rice University that studies hurricanes, flood and natural disasters. He also contacted Hal Needham, a geographer and coastal flooding expert with a business located in Galveston, Texas.

The question was why this was such a heavy storm in terms of rain and why Houston suffered most. On top of that, they talked about the decision not to evacuate the city and affected areas.

1. Why did Hurricane Harvey hit us so hard

Friday night was the moment when Harvey landed as a Category 4 storm. With winds of 130 mph, it hit Gulf coast near Rockport, and the problem is that it didn’t move much from that moment even when it was downgraded to tropical storm.

There were few reasons this didn’t happen. Usually, after landfall, upper-level winds steer hurricanes like this, but, unfortunately, those winds didn’t manage to do so, and Harvey was pretty static as a high-pressure system to the northwest prevent more movement.

Problem with such a huge amount of rain, almost 4 feet in some areas, means that the soil can’t take it all. Storm held wide area over the city and water simply didn’t have anywhere to go. Needham stated, “To get that much rain, over a wide area, and have the coastal areas elevated with storm surge — the waters are going to struggle to drain.” 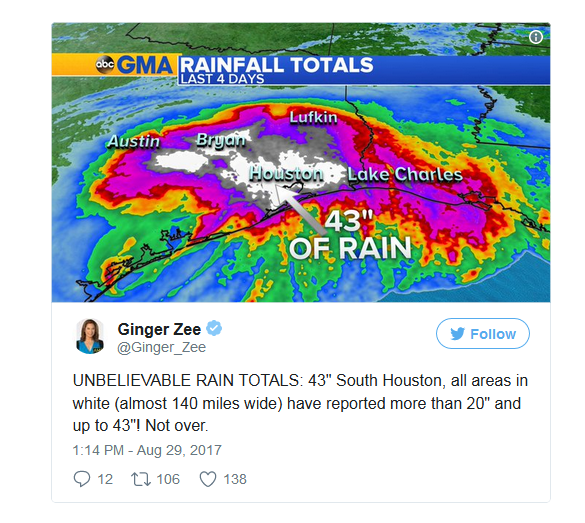 Houston and its surroundings received around 14 to 15 trillion gallons of water, and additional 5 trillion gallons are expected. That is an insane amount of rain over this land and the number of square miles it covered resulting in the catastrophe that we are watching and going through.

Without a doubt, climate change is one of the reasons why this storm was so powerful. According to David Roberts from Vox, sea-level in the Gulf has risen, plus we have high summer temperatures that resulted in water temperature going up. All these factors helped Harvey becoming what it has become.

2. Why is flooding a major problem for Houston?

Bedient said “No major urban area can survive that [amount of rain] without a problem, without some flooding,” and we tend to agree with this. Record rain that brought 15 inches in 24 hours in some affected parts certainly is not something normal or a thing that happens often.

– The expert on this topic also added that the city is flat “Like a pancake.” As a result “The water has nowhere to go.”

– When you put concrete over green space in the city, it simply loses its natural ability to take a lot of water at once. This was all done as the Houston grows rapidly and there is a need for more buildings, roads and various infrastructure. This is not a problem that occurred in the last few days, this is the issue that is bothering this and many other large cities for decades.

“We’ve had a lot of early-on development in the ‘60, ‘70s, ‘80s that created this rampant urban expansion,” Bedient stated. “The building practices were the Wild West. Drainage didn’t keep up. … It’s a developer-run community and city.” All this resulted in significantly reduced ability of soil to take water. When concrete gets the priority, that sponge effect of the ground is diminished.

During the expansion of the city, in the 1940s, west side of Houston received reservoirs that were built as a protection in case of flooding. With fast development, those become too small and not enough. When a project like this is completed you want to protect it and not allow everything to flow into those reservoirs but things changed, and they become oversaturated. “Normally when you build big reservoirs like that, you’re also going to try to protect what flows into those reservoirs. Well, that upper end has become rampantly developed that feeds excess water into the reservoirs, more water than they were ever designed to handle.”

That is not all as Bedient ads: “the lack of a will or a policy to really get serious about flood control.” During the 2016 investigation this was documented:

“As millions have flocked to the metropolitan area in recent decades, local officials have largely snubbed stricter building regulations, allowing developers to pave over crucial acres of prairie land that once absorbed huge amounts of rainwater. That has led to an excess of floodwater during storms that chokes the city’s vast bayou network, drainage systems and two huge federally owned reservoirs, endangering many nearby homes…”

2008 Hurricane Ike started talks about flood protection that would include dikes and levees. Unfortunately, that remained on talk level, and the project didn’t go any further than that. If those were realized it is quite possible that we wouldn’t have the situation that we have today.

Our climate is changing, and proof of that is the fact that Houston was hit with the third 500-year flood in the last three years. Bedient says that this certainly is a wake-up call and labels this as Houston’s Katrina. What we need to add is the 500-year flood term means that this is a chance of this magnitude event happens in any given year. It does not indicate its true frequency.

It is a good question why the Houston wasn’t evacuated. Especially after National Weather Service has advised residents to get to the roofs in case water rises so much to reach the top floor of their houses.

Many people asked why the evacuation wasn’t already on the way and why didn’t those people seek shelter earlier. An evacuation order hasn’t been issued before the storm hit the area, but we need to add that some of the city parts have been evacuated later on.

Houston Mayor Sylvester Turner responded to these questions. “If you think the situation right now is bad and you give an order to evacuate, you are creating a nightmare.” Many people remember 2005 and the Hurricane Rita when the evacuation order was issued for 2.5 million people. This caused serious problems and roads were completely blocked for days, and more than 100 people died during that time.

What it is Like to Feel Royalty With Luxury Coach Buses

Houston is in pain, destruction is huge, more than 1 million cars have been destroyed!

Jerry Jones opened up and made a $1M donation for Hurricane Harvey relief!