Opptrends 2021
Home Sport HORROR AT A CONCERT: Stage Crashed on Marilyn Manson! The Singer is...

Marilyn Manson has been severely injured when a massive prop crashed on him during a concert in New York!

Marilyn had a gig at the Hammerstein Ballroom on Saturday where a prop resembling two large guns bound together with metal scaffolding plunged down hitting him! The singer fell down instantly!

One person in the attendance claims that the singer laid down on the stage and did not move for as much as 15 minutes before getting stretchered off! Marilyn was first covered by a sheet before being placed on a stretcher and out to an ambulance vehicle.

We still have no information about his condition.

According to an eyewitness, fans went wild following the crash!

‘He was performing the song Sweet Dreams. Towards the middle of the song it seemed as though he tried climbing onto a prop.’

‘The first touch of weight on those poles and it came crashing down onto him.’

Numerous video clips were posted after the concert, and it can be seen that crew on the stage and band members did everything they could to lift the crashed stage prop off the singer, but he could not stand up!

The eyewitness mentioned above also stated that the crew covered Marilyn with a black sheet prior to taking him off the stage. Minutes later the official speaker announced the end of the concert. The reason – ‘Injury!’

Rolling Stone magazine managed to get a hold of Manson’s representative, and he didn’t say much about the situation. In his words ‘Manson suffered an injury towards the end of his incredible NYC show. He is being treated at a local hospital.’

A piece of the set fell right on him 🙁 🙁 @marilynmanson pic.twitter.com/p6KQLyXUOK

Marilyn, 48, was supposed to perform on three occasions after the NYC show. It was all a part of his ‘The Heaven Upside Down Tour.’ It is still unknown whether he will be fit to perform in Boston on Monday. 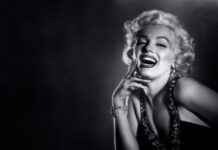 Marilyn Monroe – 10 Things You Probably Didn’t Know About Her