Herbalife Ltd (NYSE:HLF), the controversial multilevel marketing (MLM) that sells nutritional and weight loss products reported that its profit increased during the fourth quarter of 2013, and raised its earning guidance for the fiscal 2014. As a result, the stock price of the company rose traded higher after hours to $70.05 per share on Tuesday.

In a statement, Michael Johnson, chairman and CEO of Herbalife Ltd (NYSE:HLF) said, “Herbalife delivered another year of record financial performance achieved through the consistent execution of key strategies to expand daily consumption of our products.”

Johnson also emphasized that the global obesity epidemic continues to expand worldwide, and its independent members are well positioned to help their customers live a healthier life with Herbalife’s nutritious products.

By the end of fiscal 2013, Herbalife Ltd (NYSE:HLF) has $772.9 million cash flow from operations. The company invested $162.5 million in capital expenditures and returned $123.1 million cash to shareholders through dividends, and repurchased $297.4 million worth of shares.

The board of directors of the company approved the distribution of $0.30 dividend, which will be payable on March 18 to shareholders on record as of March 4.

Activist investor, Bill Ackman of Pershing Square Capital Management accused Herbalife Ltd (NYSE:HLF) as a pyramid scheme in 2012. Since then, the company was surrounded by similar accusations particularly from Latino advocacy organizations and requested regulators to investigate the alleged “deceitful business practices of the company.

A number of politicians including United States Democratic Sen. Edward Markey of Massachusetts urged the Securities and Exchange Commission (SEC) and the Federal Trade Commission (FTF) to investigate the complaints against Herbalife Ltd (NYSE:HLF).

Ackman maintained his position that Herbalife Ltd (NYSE:HLF) is a pyramid scheme, and he will go to the “end of the Earth to defeat the company.” During the recent Harbor Investment Conference in New York, Ackman said, “We actually now have a much larger position notionally than we had initially. If it were to disappear tomorrow, we’d make a lot more than had it just blown up the day after I gave my last presentation.” He launched a new website for his campaign against the company.

With regard to the recent decision of Herbalife Ltd (NYSE:HLF) to sell $1 billion worth of convertible bonds, Ackman commented, “They couldn’t sell a bond to a conventional institutional investor. I don’t think they could get a bank to loan them money.”

In 2012, Ackman revealed that he shorted 20 million shares of Herbalife Ltd (NYSE:HLF). Other big time investors such as Carl Icahn bet against him and acquired large stakes in the company. Icahn has 16.8% stake in the company. Since then, the stock price of the company traded higher. Ackman’s hedge fund lost as much as $500 million from the investment. He reduced his short equity position, but kept his bet against Herbalife through long-term put options.

Given the continuous upward movement of the shares Herbalife Ltd (NYSE:HLF)—the stock climbed from $34.52 to $83.51 a share over the past 52-week range, some investors are perhaps considering to invest in the company despite the controversies surrounding it. Smartstops.net, a stock market risk management service shows that Herbalife shares are at elevated risk. 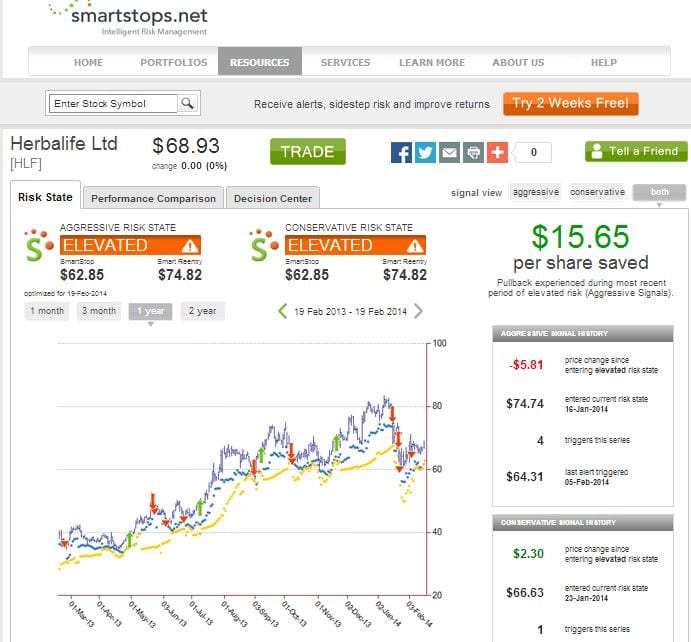