The action of Illinois Attorney General Madigan came after the investigations launched by the Federal Trade Commission (FTC), and reports that the Department of Justice (DOJ), Federal Bureau of Investigation (FBI) and New York Attorney General were also conducting separate inquiry on the business practice of the MLM company.

Herbalife has 15,000 members in Illinois

With regard to the investigation of the Illinois Attorney General’s Office, Herbalife Ltd. (NYSE:HLF) said it has more than 15,000 members and many more thousands of satisfied customers in the state. According to the company, it will continue to provide its outstanding products and services and support the good work of its members.

In addition, the company said, “We are confident in the integrity of our longstanding business and the Company’s compliance with applicable laws and regulations. We look forward to working with the Illinois Attorney General’s office to resolve the consumer complaints it has received.”

No knowledge of DOJ, FBI inquiry

Last week, Herbalife Ltd. (NYSE:HLF) issued a statement that it had no knowledge regarding reports that the DOJ and the FBI are investigating allegations that it is a pyramid scheme. The company said it did not receive any formal or informal request for information from both agencies.

Some of the organizations and lawmakers who requested Schneiderman to investigate Herbalife Ltd. (NYSE:HLF) include Make the Road New York, a community group that surveyed hundreds of Hispanic residents in the state and found that no one among those distributors succeeded in the business opportunity offered by the company.  New York City Council Speaker Melissa Mark-Viverito, State Sen. Adriano Espaillo and Council member Julissa Ferreras also requested the Attorney General’s Office to investigate Herbalife.

The shares of Herbalife Ltd. (NYSE:HLF) closed at $55.10 per share, down by 0.31%, but managed to recover after hours. The stock price of the company declined from its highest level at $83.51 to its current trading price over the past 52-week range or down by more than 30% year-to-date. 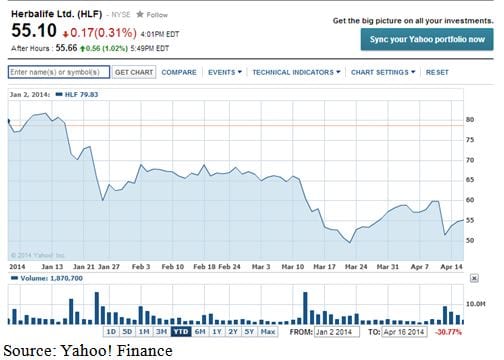 Smartstops.net, an equity risk management firm shows that the shares of Herbalife Ltd. (NYSE:HLF) remained at an elevated risk state. Investors who exited their investments when they received alerts from the firm during its most recent period of elevated risk saved $25.39 a share. The risk management algorithms of Smartstops.net are a product of more than 40 years of stock market experience.  Its proprietary analysis produces a risk price point, which can be used proactively by investors in the next day’s trading.  The firm’s service also alerts investors in real-time to an “elevated” risk state indicating a high probability of a continued decline in the equity’s price. 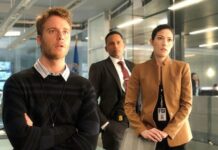 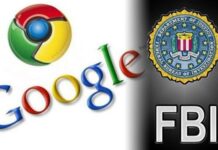