Is There Hemlock Grove Season 4? Cancelled Or Renewed?

The future of ‘Hemlock Grove’ which came out on April 19, 2013, on Netflix and lasted for three seasons is insecure. This mystery/thriller/horror/fantasy TV series caught immediate attention of viewers and received rather mixed critiques. It is based on McGreevy’s novel of the same name, produced by Eli Roth and developed by Lee Shipman and Brian McGreevy.

The plot follows the investigation of a murder which happened in very odd circumstances. Namely, it is thought that some supernatural creature, likely a werewolf, slaughtered a young girl in an abandoned town in Pennsylvania. The city of Hemlock Grove used to be an industrial area, and now it is inhabited by some rather peculiar people.

Furthermore, what is extremely strange in the murder is the fact that the girl wasn’t killed by a human being. It must have been a mysterious creature, possibly a werewolf. However, one of the two suspects is a human. He comes from a wealthy family; his father is a steel magnate. Another suspect is considered to be a werewolf. Nonetheless, both of them join the search for the real killer and help out in the investigation, during which all dark sides of the town come to the surface. The two of them are becoming involved in the investigation of many murders in a row, which all started with a shocking death of a local high-school girl.

There are many speculations there won’t be Season 4, but it might be a way to improve their reviews and win hearts of the viewers and critics. Hopefully, a large number of fans of “Hemlock Grove” will have an opportunity to enjoy the next season, which all of us are looking forward to. 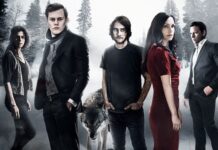