Opptrends 2020
Home Business Has T-Mobile Poisoned The Well For The Other Mobile Carriers?
423
SHARES
ShareTweetGoogle +Pinterest

T-Mobile (NYSE:TMUS)  has made strategic decisions over the past year that have increased competition between the mobile carriers.  T-Mobile changed established contract structures, particularly for how the phone cost is subsidized, that has led to a more competitive environment.  This new environment can lead to declining margins and share loss for the other major carriers, Sprint, Verizon and AT&T and creates a short opportunity for investors.  However, Sprint is considering a bid to acquire T-Mobile USA and a merger of the two would likely put an end to the disruptive tactics from the latter.   The operating environment would become less competitive, benefitting AT&T and Verizon as well as their shareholders.

Our analysis indicates investors that are looking to buy the shares of Verizon or AT&T should take a pause.   Elevated risk levels behind merger activity, noted in SmartStops proprietary analysis, in both the shares of AT&T and Verizon, along with competitive analysis of events in the sector further supports this view.

For many years, the US mobile carriers have moved lock in step within customer contract structure and pricing. Traditionally the carriers subsidize the cost of the phone and lock users into two year contracts. T-Mobile is bucking this trend and has introduced a new sales models, disrupting the standard industry practices (source: Forbes) . While T-Mobile remains the number four carrier in the US, with its new pricing model, it has recently gained significant market share in terms of users from the other major players including AT&T, Verizon and Sprint (source: Reuters). The disruption T-Mobile is causing to the other mobile carriers standard pricing and contract models has the potential to drive margins down at all of them by creating a more competitive environment.

T-Mobile was the first of the major carriers to offer a plan that separated out the phone subsidy from the service portion of the contract in 2013.  T-Mobile’s contract structure allowed consumers to bring their own phones onto its network, pay off their phone separately from the service contract which gives them the option to upgrade their phone at any time and lower the cost of mobile service.   The T-Mobile model is in stark contrast to Verizon’s and AT&T’s where phones are included as part of the service contract with upgrades offered on the carrier’s terms and requiring an extension to the contract.  Historically, this led to a sticky customer base with consumers rarely opting to change carriers.

As a result of T-Mobile’s offering, initially Verizon and AT&T made some tweaks to their service plans, but did not take the threat seriously.  However over the next few quarters in 2013, T-Mobile started to grow faster than the other carriers and take away customers, from AT&T in particular.  AT&T was first to change its plans to compete with T-Mobile and offer lower monthly service fees for customers using their own devices and allow users to break their phone purchase into installment payments separate from the phone service.

For 2014, it is heavily rumored that T-Mobile will adopt even more aggressive tactics to lure customers from the Verizon, Sprint and AT&T.  Reports indicate T-Mobile may pay termination fees for customers that are part of most contracts and particularly target users that are part of family plans.  Management will release the new plan at CES in January.  (source: T-Mobile-Houdini strategy). .  This would further increase competition and lead to greater customer mobility that would not bode well for the entrenched leaders AT&T and Verizon as well as Sprint.

Sprint is at a crossroads and could join T-Mobile in pioneering new pricing and contract structures or acquire T-Mobile.  The latter would cause the industry to return to is oligopolistic structure and decrease competition.

Sprint was recently acquired by SoftBank, controlled by billionaire Masayoshi Son.  Industry analysts such as Kevin Smithen at Macquarie expected a cash infusion from SoftBank into Sprint to fund an aggressive strategy similar to T-Mobile’s.  This would further force the hands of Verizon and AT&T to undertake actions to stop share losses, benefit consumers but not the shareholders of the two industry leaders.

This view changed, when Sprint announced its intention to make a bid for T-Mobile this past month.  The acquisition of T-Mobile, could preserve margins and cause a return to the prior status quo for Sprint and the other carriers.  The merger of Sprint and T-Mobile USA would create a carrier similar in size to Verizon and larger than AT&T.  It is important to remember the Department of Justice and FCC blocked a proposed merger between AT&T and T-Mobile a few years ago.  Sprint is smaller in size and as a result has a better chance of overcoming challenges from regulators, however substantial roadblocks remain.

A deal would need to overcome concerns that it is bad for consumers.  The benefits to the consumer from T-Mobile’s strategy discussed earlier magnify this case.  Son has challenged regulators before in Japan and it was reported the SoftBank CEO is already assembling a lobbying team in Washington.  A deal is possible and would result in three large, but evenly sized carriers, and none with a market share over 40%, historically a threshold for the DOJ.

In addition to challenges from the DOJ, the merger will face FCC challenges.  There are wireless spectrum auctions planned for 2014 and 2015.  Four versus three major bidders could decrease the total revenue received by the FCC.  The auction proceeds are intended to pay for a national wireless emergency network and also contribute to deficit reduction. Approval may take into 2015, after the auctions, but this does create an additional challenger and roadblock.

SmartStops indicates Verizon & AT&T are in Periods of Elevated Risk

SmartStops indicated both stocks are in periods of elevated risk due to the threat from T-Mobile and uncertainty if a merger between Sprint and T-Mobile is possible and will change the landscape.

Verizon Entered an Elevated Risk State on SmartStops.com on December 5, 2013

SmartStops shows AT&T have been in this period of elevated risk longer than Verizon.  In the article Reuters article noted above, the 3Q13 industry data showed that AT&T actually had a decline in its user base.  The data was published in early November, coinciding with the increased risk level to shareholders.  Verizon fared better in the data but rumors of T-Mobile’s new strategy in early December contributed to elevated risk in the stock.  Source:  SmartStops Risk Analysis for Verizon

AT&T Entered an Elevated Risk State on SmartStops.com on November 8, 2013 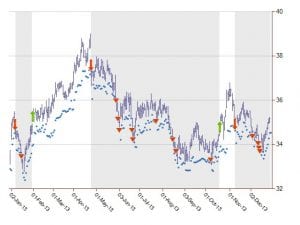 In the preceding chart, AT&T shares entered an elevated risk state that SmartStops signaled.  A re-entry point of $36 is recommended.   Talks moving forward on a merger between Sprint and T-Mobile, could act as the catalyst that return the shares of AT&T to that level.

For both the shares of Verizon and AT&T, uncertainty around T-Mobile’s marketing and customer acquisition strategy for 2014 are leading to increased risk levels in the stock.  SmartStops has helped indicate this to investors.  If either merger talks or an announcement from T-Mobile management that its plans are less aggressive than expectations, the share could bound and the share return to normal risk levels on SmartStops.  This is when investors looking to buy the shares could see an entry point with less potential downside risks in both stocks.

Why are Mobile Loans on the Increase?