It wasn’t only during the twentieth century that many talented and gifted artists and painters influenced some great changes in the art history flow. This was happening years and years ago, and each era has its own brilliant stars. British painters of all eras were definitely among them, but also the first to begin some experiences and perspectives regarding art that were rarely or never considered before. The renovations they have created included, among other things, a warm welcome to the new concept of everyday details, like the human body or the idea of the space. Some of the names that we often hear are famous for a reason – they left a true legacy for all future generations as proof of the real value of different kinds of painting techniques and eras.

Today, we’re introducing you to four magnificent British masters of painting who made a significant impact on the world of art and remained loved and respected to this day.

This man, along with John Constable, is considered the best landscape painter of the romantic period. Among some of his greatest achievements, we could mention his membership in the Royal Academy starting from 1802 and the position of professor of perspective since 1807. He also established his own gallery in 1804 after several years of traveling to Scotland, Switzerland, and France.

In his beginnings, he made engravings of picturesque landscapes with ruins, very much to the general taste of the time, and was interested in the watercolors of Robert Cozens. He liked traveling because he could find some beautiful themes and timely inspiration while doing it, together with painting the scenes that most impressed him. For example, his masterpiece “Calais Pier” from 1802 that became one of his most famous works.

In 1819/20, he traveled to Italy and visited Rome for a while. By then, Turner changed his painting style and gave up realism. He was severely criticized, which caused the Royal Academy to interrupt the exhibition of several of his most recent works.  As a consequence of this change, his painting became more luminous and atmospheric with time, so the details of the landscape tend to disappear under pearly glazes that represent the effects of light.

In his last works, the compositions became very fluid, with color contrasts predominating, which he adds in order to indicate mass effects. It can easily be noticed in the painting “Norham Castle, Sunrise”, 1845). His work is mainly among the collections of the National Gallery, the British Museum and the Tate Gallery in London; or the Art Institute of Chicago in the USA.

While some people call him “the enlightened one” with superior visions of the human soul and the Universe, for others William Blake was just an extravagant guy. And nothing more. A talented, but weird person who barely survived to make impressive prints and unforgettable poetry in which he was questioning humanity.

Critics and art history catalog him as a pre-Romantic artist. His early practice was not given at any school – he was partly self-taught and supported by his mother, Catherine, who was giving him some classes at home. Both she and her husband always boosted Blake’s artistic character, and when he turned ten, they allowed him to attend the drawing school of Henry Pars. Along with this, he also wanted to be an engraver and was gaining some experience in the workshops of William Ryland and James Basire.

However, his dreamy and melancholic character made him take refuge in Westminster Abbey, where He went to copy the Gothic forms that make up the art of this place. Blake wanted to explore the truth of the inner and outer world of human beings and the environment around him. That’s why his works are so difficult to interpret both in form and in meaning, since everything is conveniently hidden by a tide of mystery. Some of his best works would be “The Ghost of a Flea” (1819/20), “The Ancient of Days” (1794), “Adam Naming the Beasts” (1810); in case you would like to take a look at some more masterpieces of his, check this.

The messages from beyond that Blake received, some have blamed on schizophrenia that this art genius allegedly suffered. His work has helped us to understand the divine visions of an enlightened one who traveled to the confines of his imagination and perhaps from hell itself to give us a painting that encourages us to imagine the invisible parts of the Universe.

John Constable has passed into the History of Art as one of the components of the triad of great English landscape designers, who took nature as a means to permeate a vision that went beyond the mere copy of reality. Thanks to his letters, a multitude of circumstances and personal experiences that interceded in some way in his creation has become known today. In addition, for years the Tate Gallery, the Royal Academy and the British Institution have shown drawings, sketches, and paintings by Constable that have helped research and rethink the artist’s vision.

This artist creates his own style when it comes to portraying nature, which also adds theoretical studies and his knowledge about the great masters. This made him one of the key figures in landscape painting that laid the foundations for romantic painting. He also put all his effort to accurately represent the changing skies of the English countryside, where he spent most of his life, as he barely traveled outside of his country. Defining himself as “the man of the clouds”, he wasn’t really a landscape artist, since he focused his main interest in heaven – the main motive of most of his works. He wanted to understand how the atmosphere behaves and for this he became, self-taught, a student in the field and a thorough meteorological observer.

On the back of his famous cloud studios, he wrote down what the weather was like while he was carrying out his works, most of which took just over an hour to be done. In some cases, he left very precise data and comments, which had an undoubted meteorological interest. One of his best-known works is “The Hay Wain”, from 1821, where the clouds seem to be endowed with movement and some of them – the darkest ones – threaten rain. We can also see clouds in “Stratford Mill” (1820), “The Cornfield” (1820), “Weymouth Bay: Bowleaze Cove and Jordon Hill” (1816/17) and many more.

This man is possibly the most famous British living artist today. Many of his masterpieces are distributed nowadays by the best collections and museums of the world. His name on the poster of an exhibition attracts crowds of people wherever it’s placed and captivates everyone. His incisive portraits, vibrant colors and the power of his latest works (made with cutting-edge technologies) reveal an artist with a creative capacity that survives any school or movement.

The painter, draftsman, engraver and set designer, currently 82-year-old, who became blond “because blonds always have more fun” is a fundamental figure to understand the art of the twentieth and twenty-first centuries. Pop art transgressor, a tireless worker, and explicit artist, David Hockney turned his desires and passions into intense areas of color that shoot directly at the viewer’s heart and mind.

Hockney knew photography well. He used it, as a previous step, in his portraits. Portraits were a big part of his corpus, for example, “Mr. and Mrs. Clark and Percy” or paintings of some of his other friends and people he knew. In “Park of Sources, Vichy” (1970) he shows, with irony, that the perspective subtends to painting and photography. In 1982 he tackles a venerable landscape genre, the panorama, but the ambitious views of the Grand Canyon don’t entrust him to painting, but to photography.

In those same years, Hockney paints great views of Californian landscapes. There are echoes of oriental painting and Gauguin. From oriental painting, because it is landscapes of the traveler, not of the traveler but of the motorist who goes from home to study every day. Of Gauguin because they are views that have settled in memory. Also indebted to cartography and cubism, these landscapes build bold spaces, vibrant colors, and abstract shapes. 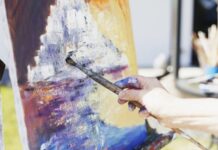 How to Choose the Right Painter?