According to Munster, Google Now showed significant improvement from D- last year to C+. Its current performance matched Siri’s C+ score, which was upgraded from C  in December last year.  Munster noted that the voice search service of Google Inc (NASDAQ:GOOG) outperformed its rival in terms of providing correct answers in the commerce and local categories. However, Munster said Google Now is still behind Siri when it comes to OS commands. 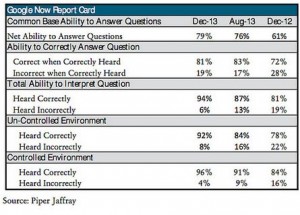 In a note to investors, Munster wrote, “Google Now has improved significantly over last year, refining both its ability to comprehend questions as well as give a correct response.” He added that Google Now’s ability to parse out the user’s voice in uncontrolled environments great improved from 78% in December last year to 92%.

“ Furthermore, Google Now has significantly improved its ability to get the correct information to the end user, as seen in the 9pp improvement over the past year in the percent of answers answered correctly when recognized correctly (Siri improved 2pp),” noted Munster. Google Now’s ability to answer questions correctly is 79%.

On the other hand, Munster observed that Siri’s performance in iOS 6 and iOS 7 improved in noisier environments. Siri on iOS 6 was able to translate better in a noisy environment (94% correct compared with 83% correct last August). He also added that Siri’s ability to answer questions correctly progressed from 77% with iOS 6 to 79% with iOS 7.

Munster evaluated the efficiency of Google Now and Siri indoors and outdoors by asking each with 400 questions in five categories including commerce, information, local, navigation, and OS commands. According to him, an answer is considered successful if the voice search assistants provide answers or information without the need to open additional links.

Munster has an outperform rating for the shares of Apple Inc (NASDAQ:AAPL) and Google Inc (NASDAQ:GOOG) with a price target of $640 per share and $1,263 per share, respectively.

Pixel’s Google Assistant Vs Android’s Google Now – Which One to Pick?

Richard Orland - December 7, 2022 0
THC consist only of edible cannabidiol oils (THC). It comes available in a range of different tastes, colorings, and forms, as well as varying...