In July 2015, God Eater appeared as an anime adaptation of a video game of the same title. Animated by Ufotable and directed by Takayuki Hirao, the anime began airing on July 12, 2015, and it ended in March 2016. The first season comprised 13 episodes.

In case you are not familiar with the series plot, God Eater focuses primarily on Lenka who has a tragic backstory and a strong urge to kill Aragami, the great enemies of the humankind. Another important character is Lindow Amamiya, a brave fighter who confronts the Aragami all by himself. He is the captain of the squad known as God Eaters. At the very end of Season 1 we find out that one of the Aragami monsters, Dyaus Pita, bit off Lindow’s arm, but we don’t get to know what happened after that and whether or not Lenka and the rest of the squad managed to save him.

Since the first season ended with such a cliffhanger and it has been a year since the last episode premiere, we could hear speculations for quite some time what might happen in Season 2. While some believe it will follow the events of the video game, others think the next batch of episodes will bring something completely new.

But, there is one particular rumor that picked fans’ interest – the possibility of a new character replacing the original protagonist, Lenka. On the one hand, some rumors suggest that this will be a character we already know of, someone who has been related to Lenka in some way during Season 1. That is not all as it has also been speculated that this character will be an element of surprise, someone new. In addition to this, there is also the possibility that the upcoming season will not be really new, but only a sequel to the original God Eater anime.

For the time being, it still remains unanswered whether Lenka will be replaced or not and whether we should perhaps expect more new characters in God Eater Season 2. This is what we know for now, but follow us and we’ll let you know as soon as we find out more about the anime’s further development. 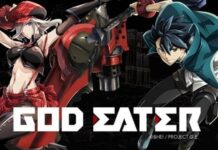