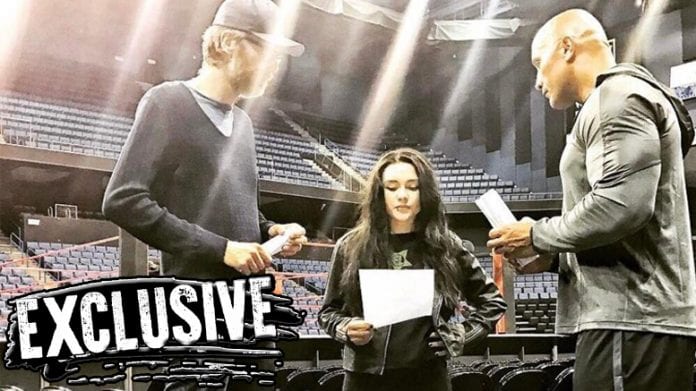 In recent time Dwayne Johnson was preoccupied with projects such as Rampage and Skyscraper. But let’s not forget he has seventeen movies in the making. One of those is Fighting With My Family.

This movie revolves around female wrestling star Paige and her famous wrestling family. Unfortunately, after suffering neck injury her role in WWE will be reduced, but she will still enjoy the spotlight through this film. The first teaser trailer for the biopic of her family’s life was released during the Wrestlemania weekend. The clip shows one of the greatest wrestlers of all time – The Rock.

Last year in February, Seven Bucks Productions owned by Dwayne Johnson, started working on this project. Fighting With My Family is based on the life of Paige and her British wrestling family. If you didn’t know, they are a household name in the UK in the world of professional wrestling.

Guiding @SevenBucksProd has been so rewarding. Our growing slate is beginning to include the powerful female narrative! Congrats to our partners @WWE and our powerful cast in bringing to life @RealPaigeWWE’s journey to the #WWE. Enjoy this 1st look at #FightingWithMyFamily 😉 pic.twitter.com/lmNykFfYMf

The trailer shows young Paige at the start of her career where she got the chance to meet The Great One himself. The Brahman Bull gives them a lesson on how to win over a crowd, which is something he was unparalleled in the WWE. This is a short clip, but it sends you down the memory lane.

After asking People’s Champ what advice would he give them on turning the crowd on their side, he decides to help them. First thing first, he asks what their names were. But, before they have a chance to answer, Dwayne Johnson, in the role of The Rock went fully into his WWE mode by saying the legendary: “It doesn’t matter what your names are!”

The rant continued with some epic The Rock tantrum. The fans were thrilled with his performance. Putting Oliver Twist, Marry Poppins, and Harry Potter into the mix added another layer to the legendary trash talk of The Great One. You need to see this for your self. Check out the video below.