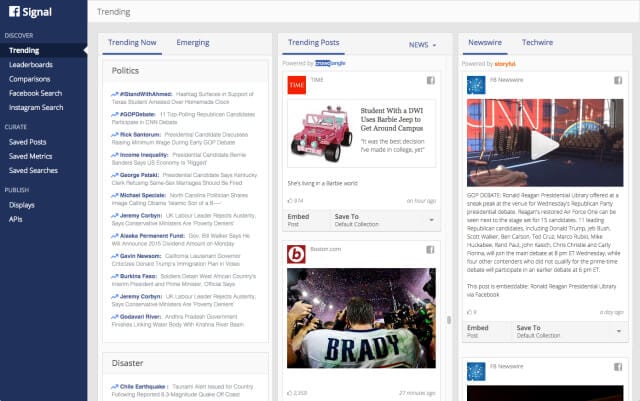 Facebook Inc (NASDAQ:FB) is rolling out a new feature called Signal that is aimed at journalists. The company is rendering Signal as a content curation tool that journalists can tap into to monitor trending topics and also source for content. Signal appears to complement Instant Articles, another Facebook feature that targets the media.

Facebook Inc (NASDAQ:FB) is leveraging its wealth of data to help journalists have a much easier time following breaking stories around the world. The company has come up with a dashboard that it calls Signal from where journalists can keep tab on hot news topics and also source content for their own writing.

Signal is designed in such a manner that it pulls content from both Facebook’s main app and Instagram. It is possible Facebook could also in future integrate the app with its other Web properties such as WhatsApp. Journalists can also tap into Signal’s API to display coverage of events or for content feed.

Signal is another demonstration of Facebook Inc (NASDAQ:FB)’s growing interest in courting news organizations and publishers in general. The company already has a media targeted tool called Instant Articles, which allows publishers to post natively onto Facebook’s platform.

Facebook told publishers that posting directly on its platform ensures that their content loads faster than when they post on their own websites. Several major news organizations have signed up for Instant Article’s and Signal is another tool their journalists can use to curate content for better readership.

Looking beyond the features that Facebook is rolling out, it appears that the company is also starting to harvest its data so that it can do more for different groups of users. When it comes to tapping into the power of the massive data held, Twitter is in front of Facebook. Celebrities, financial traders, politicians and journalists already frequent Twitter just to consume data-based information.