The stock price of Facebook Inc (NASDAQ:FB) plummeted further and closed to $56.75 per share, down by 4.61% on Friday.  The shares of the social network giant also suffered more than 5% decline on Thursday.

Investors continue to sell off their stakes in momentum stocks particularly in the technology and biotechnology sectors. The NASDAQ composite declined 110 points or 2.60%, its worst performance this week. The index also suffered a decline of nearly 1% yesterday.

The gains achieved by Facebook Inc (NASDAQ:FB) this year were almost wiped out by its recent decline. The stock price of the social network giant is still 5% higher year to date. Some market observers noticed that the equities of the company started to decline after announcing its decision to acquire Oculus, maker of virtual reality goggles for $2 billion and its new Connectivity Lab that will focus on achieving its objective to provide internet access to the rest of the world using drones, lasers, and satellites.

Other observers suggested that investors became concerned with the fact that Sheryl Sandberg, chief operating officer of Facebook Inc (NASDAQ:FB) sold a large number of her shares worth around $398 million in the social network giant since it went public in May 2012. Sandberg used some of the proceeds from the sale to pay taxes. Sandberg still owns 0.5% stake in the company.

Andrew Bush, editor and publisher of The Bush Update and a CNBC contributor wrote, “It leads one to believe that you should be a little bit nervous here, a little bit concerned about Sandberg because she was the adult that was brought in to help run Facebook. They’ve obviously had tremendous success with her. But, I wonder what the conversation was about buying WhatsApp. Was that an agreed-upon thing between those two or was there a schism there that may have led her to sell?”

Smartstops.net, an equity risk management firm shows that the shares of Facebook Inc (NASDAQ:FB) are currently at an elevated risk state. The stock entered its current risk state when it went down to $64.62 a share on March 24. Investors who received risk alerts during its recent period of elevated risk from the firm and pulled back their investments in the social network giant saved $8.30 per share. 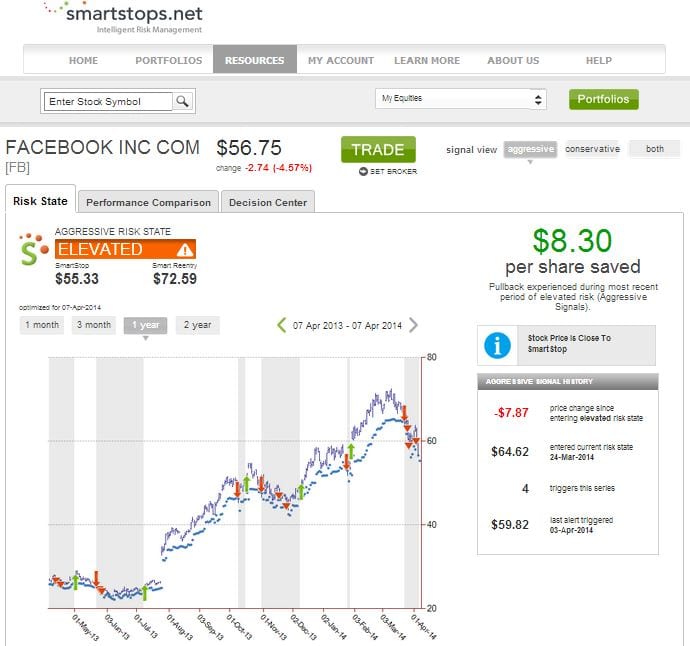 Other momentum stocks such as Tesla Motors Inc (NASDAQ:TSLA) and Netflix, Inc (NASDAQ:NFLX) also dropped by 5.85% and 4.90%, respectively. Smartstops.net shows that the shares of both companies are at elevated risk. Investors who exited their investments in Netflix when they received risk alerts from the firm when it entered its most recent state of elevated risk saved $72.62 per share.