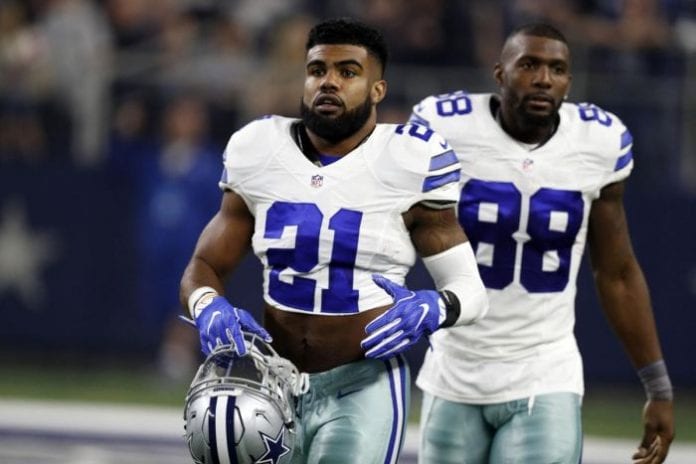 Ezekiel Elliott and Dez Bryant were teammates for two years. But, Dez missed three games in 2016, while Elliott was out for six in 2017, so they only appeared in 24 games together. If you take a look at the team’s offensive orientation, Zeke is a successor to Bryant. Before Elliott was drafted, Dez was the primary offensive weapon in Dallas.

Before Dak and Zeke era Romo/Bryant was the combo Cowboys fans adored. But, due to injuries, Romo’s career was shortened. The Cowboys strengthen their O-line through the draft and with the addition of Elliott they became a run-heavy team. Bryant, who was on the decline, with a massive contract, and older by the day was cut, and it’s been ten days since his release.

America’s Team will continue without him, but a cornerstone player such is Dez Bryant won’t be forgotten in a day. Elliott is one of those that will miss him the most. With Bryant on the field teams were afraid to stack the box to stop the run completely. If Cowboys fail to replace him adequately, Zeke will have a hard time to repeat his numbers from 2016.

Talking to Jean-Jacques Taylor of NBC 5 Elliott said: “It’s tough, Dez is someone we’re all very close with, a leader on the team, one of our better players, but it’s the nature of the game, it’s a business, and it just shows you that.”

In days after his release media speculated that one of the reasons Dez was released was that he was “locker-room poison.” Looking at statements from his former teammates this was certainly not the case. Players such as teams best pass rusher DeMarcus Lawrence and cornerback Chidobe Awuzie wished the best for Bryant in the future and thanked him for being a good teammate.

But, football is business after all, and Cowboys now have a tough job of finding Bryant’s replacement. There are few WR that are left on the free market, and none has the quality to replace Dez. That leaves Big D franchise with an upcoming draft to select their man. Players such as Calvin Ridley and D.J. Moore are in the mix for the No19 pick, but there are guys beyond round one that could be the right fit in Dallas.