Opptrends 2022
Home Entertainment An enormous 22 metres long sea creature is washed up on a...

Dusun Hulung’s Luhu Village has been the center of attention for a few days since a huge corpse of a dead animal was found on its shore. The carcass has caused great contemplation of the local population, and it immediately provoked the discussion on social media. Now everyone wants to know what kind of a rare species this is.

At first, it appeared to be just a boat, seen from far away. However, for those who approached this strange phenomenon, the sight was more than extraordinary. It was difficult for them to say whether it was the body of a giant squid or a whale or neither. The headlines such as “Mystery monster washes up on Seram Island in Indonesia” and “A gross, mysterious sea monster has washed up on an island in Indonesia” started to flood the Internet.

According to the Indonesian officials, the mysterious monster proves to be a whale which most likely died 3 days before it was found stranded on the coast. And the cause of its death is still unknown.

Nasrun, coming from the Ministry of Marine Affairs and Fisheries (KKP), confirms that the creature is, in fact, a type of a whale. According to this expert, he managed to identify it.

What makes them believe that their guess is correct is the fact that this whale is the creature’s size and has its structure of the body. He also explained the reasons which made some people believe that it was a squid rather than a whale. The reasons were tentacles and sharp teeth, but those could be explained by the process of decaying. This process has led to the creature’s deformation.

To say for sure that the creature is a whale is impossible at the moment. The samples have to be sent to the laboratory in order to come to a definitive conclusion. 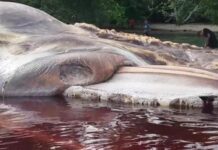 A monster from the sea in Indonesia has been discovered