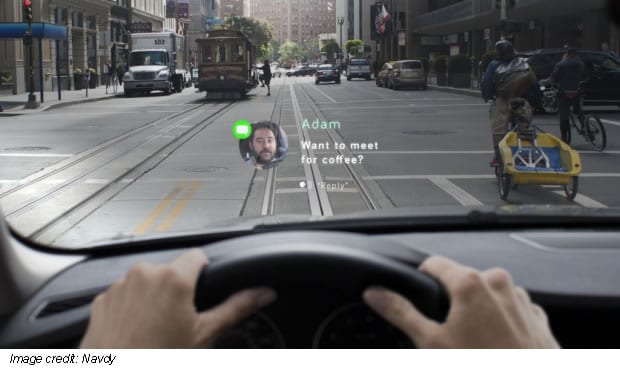 Google Inc (NASDAQ:GOOGL) (NASDAQ:GOOG) Glass will soon be accessible for the drivers on their windscreen of their cars. This innovation is for professionals, who want to remain connected while driving as well. Earlier, the time spent driving could not be utilized for work and hence got wasted, but now this new technology would allow the users to focus on the road while driving and at the same time be able to pay enough attention to their work, as well.

Work & play on the go

The idea of facilitating work while driving has been brought by a Francisco-based start-up Navdy that has unveiled Google Inc (NASDAQ:GOOGL) (NASDAQ:GOOG) Glass to windshield, according to stuff.co.nz. For this, the company has designed an aftermarket console that has the capability of combining a projection display with voice and gesture controls. This system is designed to find place between the steering wheel and the windshield. At a distance of nearly six feet from the windshield a transparent image is projected by this system.

The technology called Navdy HUD (Head-Up Display) system is designed to facilitate connectivity of iPhone and android devices via Bluetooth and sharing of data via WiFi. It also provides navigation services by connecting with Google Maps and displaying the projection on the windshield. If by chance a call or message is received while using the navigation service, the screen will split into two-parts with each part displaying one of the two. While the calls can be easily taken by giving thumbs up and hung up by swiping through the windshield, messages can be read aloud to the driver.

The system is compatible with all the cars manufactured after the year 1996, and offers multiple features such as displaying the car alerts including speed, miles-to-empty and battery-voltage. The users can, also, enjoy numerous other services such as Spotify, Pandora, Google Music and messages from the social media sites, but cannot scroll through the Facebook Inc (NASDAQ:FB) news feed with the Navdy HUD system.

CTO of Navdy, Karl Guttag said the smartphones are not suited for use while driving as it requires the user to take eyes off the screen, which could lead to fatal accidents. This is why he thought of the Navdy HUD system.

“So we started by completely rethinking what the experience of using apps behind the wheel should feel like,” Guttag said in the company’s blog.

4 Mistakes in Mentoring for College Students

Richard Orland - March 28, 2020
0
Among many benefits of mentoring for college students, sharing your experience and empowering the younger generation are probably most satisfying. A mentor could be...

The Forgotten Link Between Storytelling and Lead Generation

5 Reasons You Should Hire a Professional Painting Company – 2020...

Places you Can Buy Marijuana Without a Medical Card – 2020...

How to Protect Yourself From a Bad Debt Settlement Company

CBD Capsules Vs Edibles – Which Should You Choose 2020 Guide?