When the first e-bike of modern design saw the light of day almost 30 years ago, the electrically assisted bicycle was still considered an exotic absurdity, at best suited to help older people get over the next hill.

In the following three decades, the electric bike then blossomed into a serious advancement for a society threatened by climate change and suffocating in traffic avalanches.

Officially, the electrically assisted bike, which we are talking about here, is called Pedelec. That is an abbreviation for the “Pedal Electric Cycle.” It means a bicycle that, with the help of an electric motor, supports the pedaling performance of the rider when necessary and makes this support dependent on the pedaling strength. E-bike was originally the name for the entire bicycle driving, which is active even without pedaling power and is usually controlled via a rotary control on the handlebars. In the meantime, the term has become established for the entire segment of electric bicycles, which is why it should also be used in this article.

E-Bike — Older Than You Think

Before 1900, there were bicycles equipped with electrical support. Due to the lack of high-tech sensors and modern materials, these vehicles cannot really be called e-bikes. The idea on which today’s e-bikes such as the high-performance CUBE bikes are based on comes from the Zurich inventor Egon Gerhard. In a study published in 1982, he presented an electric drive that depends on pedaling power for the first time. The first of this type took part in the Tour de Sol in 1990 and was also the winner in its category.

Then it went quickly. From 2012 to 2016, the number of e-bikes in many countries more than doubled to 2.8 million. This means the share of electric bikes in the total inventory is around 13 percent. A lot of models exist today and these powermax ebikes ensure speed and also look cooler.

And What Exactly is an E-bike?

Based on the fact that e-bike is actually a pedelec nowadays, this term has even officially established itself in the German road traffic regulations. According to paragraph 39, paragraph 7, it is a “two-wheeled single-seat moped with electric drive, which is equipped with an automatic switch-off at a speed of 25 kilometers per hour”.

According to 10ebikes.com research, in many countries, an e-bike is considered a regular one, so it can also use bike paths. However, this only applies to the vehicle class, which is equipped with engines up to 250 watts and is below the speed limit of 15.5 mph. You can ride such e-bikes without a license, without a helmet, without a license plate, and even without liability insurance. If no pedal drive is required for locomotion, the legislation speaks of a bicycle with an auxiliary motor (the original e-bike). However, in different countries, this rule can have changes and specifics.

This vehicle is always equipped with an electric motor, motor control electronics, a battery, and a control sensor system for measuring the pedal pressure. Depending on the model, the engine can be housed on the front wheel, on the rear wheel, or in the middle of the bike. A control element is mounted on the handlebar to display the battery charge level and set the level of support.

Which E-bike for which purpose?

There are now e-bikes for every purpose. For example, the CUBE model range presents all of them: from the universal trekking to the road and mountain bike class and women’s and children’s ones. Sometimes the specialists for high-quality US luxury bikes also divide the individual classes into model groups that are precisely adapted to the user profile. In the trekking class, for example, there can be such groups as Comfort, Tour, and Sport.

The economy has also recognized the enormous potential of e-bikes. The speed advantages in our congested cities with a simultaneous decrease in emissions and noise pollution speak an unmistakable language. There is now a constantly growing range of cargo e-bikes for all possible applications. A lot of enterprises deliver large parts of their mail and goods with e-bikes. The electric bicycle is also becoming increasingly important for the police, private fleets, courier services, and catering delivery services.

Of course, the purchase costs for an e-bike are noticeably higher than for a conventional bike. But this comparison is inappropriate because an electric bike is not a normal bike and is not used as such. Basically, one would have to compare the electric bike — at least partly — with the car, since it has taken over a large part of the responsibility, particularly in inner-city areas. This way, the bill looks very different. As for the acquisition costs, the win goes to the electric bike. Unlike the car, there is no tax, no insurance, and no major maintenance. The highest costs here are caused by the possible replacement of the battery. But the greatest superiority is in fuel costs.

The fact that e-bikes were initially unable to assert themselves was largely due to the inadequate properties of earlier batteries. Particularly short ranges, rapidly declining performance, and the hated memory effect when charging batteries that were not completely empty and made it difficult for early e-bike users.

The memory effect is also a thing of the past. Since bicycle batteries had to withstand short-term, sudden power consumption in the maximum range, the lifespan of earlier batteries was not too long. Today’s batteries are high-current-resistant thanks to new material technologies and modern battery management — it reliably protects them from overloading or overheating and gives them a long life.

Modern battery technologies also have a positive effect on the range of e-bikes. However, it can vary greatly depending on the type of bike, the battery used, and, last but not least, your own driving style. Ranges between 24 and 74 miles per battery charge are therefore possible. Some models with wheel hub drive have recuperation technology, i.e., recharging of the battery with your own pedaling power or while driving downhill. This noticeably increases the range.

E-bikes have become an integral part of today’s traffic. In many cases, they represent the most optimal form of transportation for work and leisure — even more advantageous than the car. When choosing the right e-bike, however, three factors are of crucial importance: the use of high-quality components, first-class workmanship, and comprehensive service. 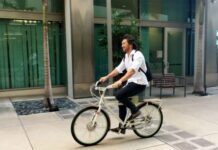 6 Reasons Why Electric Bikes Are the Future of Transportation