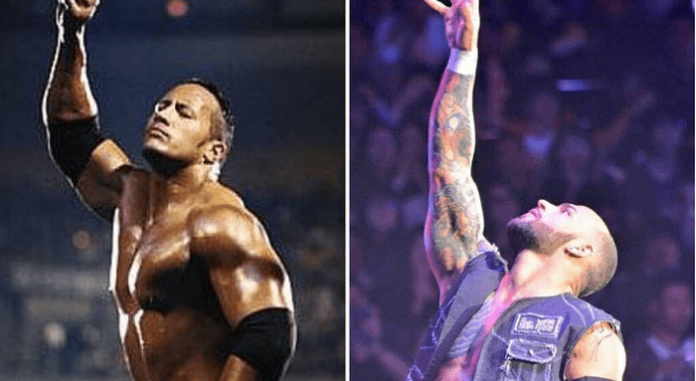 Dwayne The Rock Johnson finished his wrestling career years ago. During the last decade, he only participated in matches scheduled for the biggest PPV events such as Wrestlemania. Unfortunately, during last few years, one of the biggest stars of the business wasn’t even attending WM. That doesn’t mean that he no longer has an interest in what’s happening in the world of sports entertainment.

The Rock is the legendary WWE wrestler who started from the bottom and left the company as the greatest wrestler of all time. Today he has a successful career in Hollywood, and the wrestling days seem like a thing of a distant past. But, even when things are like that, he takes some of his time from acting and promoting his moves to watch Raw and Smackdown, but also he has his eyes on NXT.

During an NXT TakeOver: New Orleans 29-years old wrestler Ricochet had his in-ring debut. His performance didn’t go unnoticed by The Great One, and Johnson even publicly praised him via Twitter: “He’s the man! Love the stuff King is doing and will no doubt be the leader in ushering in a new era of our wrestling business. Future champ.”

He’s the man! Love the stuff King is doing and will no doubt be the leader in ushering in a new era of our wrestling business. Future champ.

For a young wrestler trying to go up the ladder and find his place under the sun, there couldn’t be a better thing than getting praise from Brahman Bull.

Ricochet saw The Rock’s comments and immediately gave a response: “Thanks man, that truly means the world. And besides, gotta give a shout out to the most Electrifying Move in sports entertainment!”

Thanks man, that truly means the world.

And besides, gotta give a shout out to the most Electrifying Move in sports entertainment! #PeoplesElbow #PeoplesMoonsault https://t.co/K3isdGtDhi

Ricochet has a nickname ‘Future Of the Fight,’ and this is one of the leading reasons why he left New Japan Pro Wrestling and joined WWE. He knows that in order to reach the summit of wrestling he needs to be in the biggest company. After his debut in New Orleans NXT, this guy has a big feud set up for him. According to rumors, his next opponent is going to be Velveteen Dream.

Carried on the wings of The Rock’s comments, Ricochet is now aware that the sky is the limit.