Dwayne The Rock Johnson Has a New Stunt Double

There aren’t many people in this world that can be stunt doubles for Dwayne The Rock Johnson. Conan O’Brien isn’t one of them, of course, but you probably shouldn’t tell him this. The man believes that he’s got the goods to be one. The host of TBS late-night Conan O’Brien is convinced he should be the first choice for The Rock’s stunt double. We, on the other hand, aren’t so sure.

O’Brien actually went as far as to try to convince Jumanji: Welcome to The Jungle and Central Intelligence star that he’s the man for the job. Conan was adamant in claims that he has what it takes to be in action sequences of Johnson’s latest movie Rampage instead of Dwayne.

Seeing them beside each other, it doesn’t take much to conclude that these two have a minimal resemblance. Dwayne Johnson’s titan physique is opposite of Conan’s slim and almost tender build. And if you switch your attention to the most upper parts of their bodies, you will notice just a slight difference in the length of their hair.

This comparison should be enough to discourage O’Brien to apply for the job of People’s Champ double and stuntman, but it wasn’t. According to him, all you need is a bald man’s cap and jacket and pants that look like ones Johnson wears in this movie. 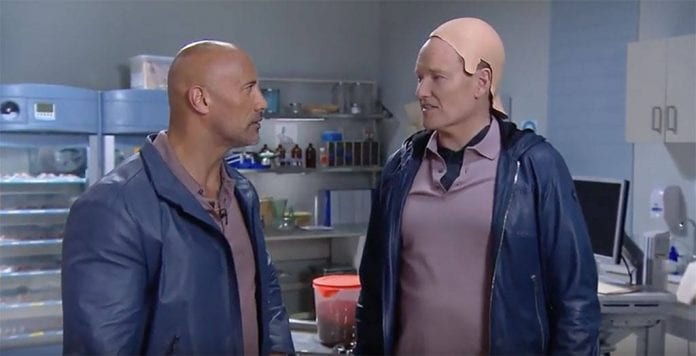 O’Brien said on the subject: “I just want to show you I can do it because I know you question my physicality, but that was your first mistake and you don’t get a second chance.”

The one-liner spoken by O’Brien had that “The Rock tone” but the rest of his performance not so much. After being thrown across the table, his bald cap fell off. He put a lot of work into practicing his stunts, we give him credit for that, and he has the stamina to withstand a few punches from a man in a gorilla suit, but that’s just not enough. To be The Rock’s double, you need something this guy has.

But Conan found a silver lining in all of this believing he has a future in one different career: “I think if you and I made a movie together, we could kill it.” Apparently now he’s ready to become a Hollywood superstar just like Dwayne became after he left the WWE. Enjoy the entire clip below.