When Dwayne Johnson chose to dress up as Popeye for Halloween, everyone started wondering what it would like to see The Rock as a live-action Popeye. This has become so intriguing that fan art extraordinaire BossLogic decided to take a photo of Dwayne Johnson and Emily Blunt taken on the set of Jungle Cruise and help us all imagine the former wrestler as the popular cartoon sailor.

Created by cartoonist E.C. Segar for inclusion in the daily Thimble Theater comic strip, Popeye as a character first appeared back in 1929, but it was already in the 1930s that it was adapted into animated cartoon shorts. And then in 1980, it finally got the live-action version, with Robin Williams in the main role.

When it comes to the previously mentioned Jungle Cruise movie, Jake Morrison, the movie’s visual effects supervisor, said that it is primarily Johnson’s version of an Indiana Jones film, and here’s how he explained it:
“I mean I’ve got to say, I’m incredibly excited about the whole thing, it’s really like Dwayne is in a new Indiana Jones film. It’s Dwayne at his best, and that is a man with some severe charisma,” said Morrison. “And then we’re putting him on this huge adventure, and they’ve just literally announced the female lead in the picture is Emily Blunt. So, we’re really excited. We start principal photography … well I’ll probably blink and we’ll be doing principal photography, but we are in prep right now. And that’s going to be a very fun film.”

Jungle Cruise is set to see the light of day in July 2020. In the meantime, stay tuned for more news, and tell us what you think about The Rock as iconic Popeye. 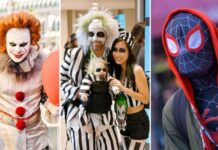