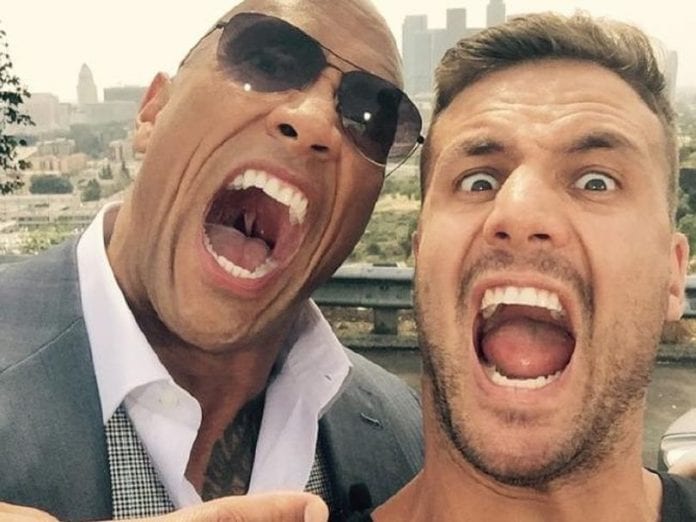 Beau Ryan former Tigers and Cronulla winger have had a sudden popularity jump, and it is all thanks to the job on the Channel Nine Footy Show where he is hosting a show cleverly called “Beau Knows.” Even though Beau is retired, he is one of the rugby league’s favorite characters, and he has justified that through many shows where he has interviewed some pretty big names outside the sporting world, and one of those names is very familiar to the entire world – Dwayne Johnson ladies and gentleman!

Apparently, Ryan found himself in the US earlier this month where he came for the premiere of Johnson’s new movie Baywatch, and according to a video we found posted on his Facebook page, Johnson allowed Ryan to stay in his Miami condo while he’s on the assignment. You probably ask yourself how in the world did Beau manage to get inside Dwayne’s personal condo? Well, the fact is that after Dwayne guest starred in Beau’s show, these two somehow clicked and started having a bromance! But we are getting off topic here.

It seems that nothing in this world will ever come free, so is with Beau’s stay at Dwayne’s home, and his request to get a spot at Baywatch premiere. The next thing you will see is a segment that went to air on The Footy Show on Thursday night, and it shows Dwayne actually shaving Beau’s head. How did it come to this? Well, as I already said Beau was interested in getting a spot on Baywatch, and he asked Dwayne about it on which he got the next answer – as a first step “shave that s*** off your head,” Dwayne was referring to Ryan’s blonde dyed hair. “I know Justin Bieber told you to keep the tips, don’t do that,” Johnson added.

After that, all hell broke loose when Dwayne pulled out the clippers and got to work. He started by shaving just a little bit of hair off, and in The Rock fashion changed his mind and equipment without Ryan noticing, and made sure Ryan’s scalp became more obvious than ever. As you will hear during the video, Johnson tried to console this guy by saying “It’s still on number two.” Ryan also told Dwayne that he and his wife are expecting a baby and that they had plans to take some baby bump photos next week so he got permission from his wife – “She said cut it but not too short,” Ryan said.

As you know a bad-ass man like The Rock doesn’t care about anyone’s plans and when he wants to do something he does it no matter what the stakes are. That fact is proven once more by the butchering he did to Ryan’s hair. After the job was done, Dwayne showed him what he did –
Ryan: “Are you serious? I’ve got baby photos next week”.
Johnson: “Yep, and you’re going to look really f***ed up doing those baby photos.”
Ryan: “What’s this? It looks like (The A-Team character) Mr T but white and not as muscly. F***”.

Check out the video below! It is hilarious!