As it seems, this boulder of a human is totally ready to carry the entire cast of Saturday Night Live on his very broad back straight through the weekend’s season finale! As you will see here in the promo video of the latest episode The Rock means that literary.

In the very brief video, we have here you can see that Beck Bennett actually struggles to give Johnson a piggyback onto the Studio 8H stage while our Fast and Furious star does that with ease and happily switches places with Bennett. But wait, The Rock wouldn’t be what he is if he didn’t do things his way – the extreme way. He actually piled a lot more bodies to make the ultimate piggyback tower, and he did that while managing to squeeze a flirt with Leslie Jones. “Hey, baby I want a cookie” she said.

There is one more interesting thing in the video, and that is the fact that this weekend is Dwayne’s induction to the Five-Timer’s Club, which is just a week after Melissa McMcarthy earned her fifth hosting appearance. What is making this episode even more special, besides The Rock, of course, is that this will be the final of a series of announced shows broadcast live across the nation in all four time zones. The musical part of the show will be Katy Perry’s task, and she will as a music guest close out the 42nd season on a high note.

Besides the video you see here, we also included a bonus in the form of Dwayne’s behind-the-scenes photo from the SNL promo shoot which he posted to Instagram on Wednesday. He titled one of those images – “I got you all. I am your safe place. Grab my body parts. I mean, hold on!” Dwayne joked. The season finale of SNL airs this Saturday at 11:30 ET, 10:30 CT, 9:30 p.m. MT, and 8:30 PT. Tune in and catch what will most likely be a great season finale episode. 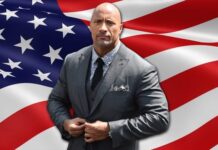 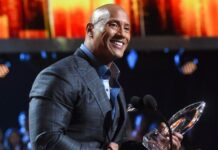 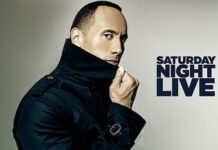