A lot has been written about Dwayne The Rock Johnson’s upcoming DC standalone film Black Adam and the latest info that has come up, courtesy of The Tracking Board, is that the Undateable series creator Adam Sztykiel is currently in negotiation to pen the New Line Cinema and DC Entertainment movie.

The first thing that comes to everyone’s mind, at least to those who are familiar with the work of Sztykiel, is that his choice for penning the wicked story of Black Adam is a very unlikely. If you wonder why, well the fact is that Sztykiel is basically a family-friendly project kind of guy. He did movies like Alvin and the Chipmunks: The Road Chip and Diary of a Wimpy Kid: The Long Haul, but besides that he did some slightly more serious work like Robert Downey Jr. and Zach Galifianakis’s road-trip comedy Due Date, as well as We’re the Millers 2 starring Jennifer Aniston and Jason Sudeikis.

But if we put aside all the previous work he did, this engagement (if it happens) will be just one more continuation of the trend that sees filmmakers get their huge brakes with superhero flicks. The pattern we mentioned already saw Anthony and Joe Russo finding their success with the Captain America: The Winter Soldier, as well as the New Zealander director Taika Waititi, did with his extraordinary take on the Thor franchise with the upcoming Thor: Ragnarok.

But there is another thing that ties Sztykiel very closely with this superhero movie, and it’s the fact that Black Adam is a co-production with New Line Cinema which is the same studio that Sztykiel has a strong working relationship with. The Black Adam has still to pick its director, but there is already a few candidates like Johnson himself and Hiram Garcia of Seven Bucks Productions, as well as Beau Flynn of the Flynn Picture Company.

Those of you who are not familiar with Black Adam, he was originally depicted as a corrupted, ancient Egyptian predecessor of Captain Marvel, who fought his way to modern times to challenge the hero and his Marvel Family associates. Since the turn of the 21st century, however, Black Adam has been re-defined by DC Comics writers Jerry Ordway, Geoff Johns and David S. Goyer as a corrupted antihero attempting to clear his name and reputation. His main adversaries are Captain Marvel, Green Lantern, Raven, Superman, Superwoman, Wondergirl, and Shazam. 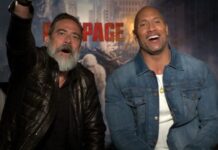 Dwayne Johnson backs his former co-star in another big project