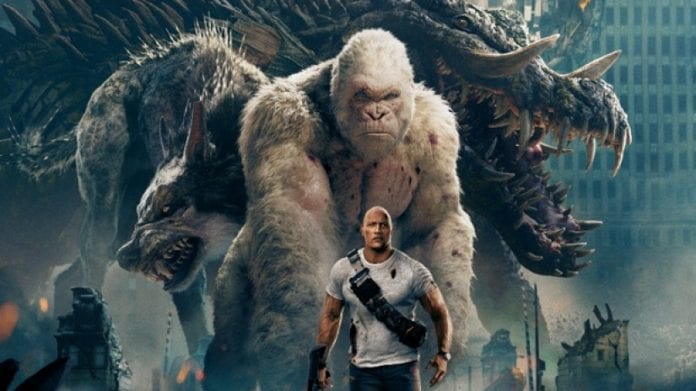 Just last week we were surprised by the news that the Marvel’s Avengers Infinity War will be arriving in theaters sooner than anyone expected. If you recall, the first official release date was May 4th, but just last week we found out that it will be launched on April 27th and it made us ecstatic. On the other hand, with this, we have some “bad” news as well, and they regard Johnson’s upcoming movie Rampage that will also come at a different date than expected.

As you already knew, the original release date for the Rampage was set for April 20th but, according to Hollywood Reporter, Warner Bros. decided to scrap that date and move the movie a little bit earlier – April 13. As we manage to find out, this move is made mainly because you have to give it a more breathing room at the box office, plus the producers are demanding something they call “two-week cushion” in order to ensure that their project will guarantee some strong box office revenue. If you were heading against something unbeatable like Avengers Infinity War, I bet you would opt for the same tactic.

The Avengers, with their earlier release, almost ruined the launch dates for some other upcoming titles, but thankfully they all seem safe. The closest to the Avengers (besides Rampage) is Ready Player One, which hits theaters on March 29th. It has a nice two-week window before Rampage so it should be OK. Next one down the line is Tomb Raider which arrives on March 16th and the only competition it has is from Pacific Rim Uprising which comes to theaters on March 23rd, but both of these are long away from the Avengers and Rampage, so they don’t have to worry about poor box office revenues.

If you haven’t caught any of our previous posts regarding the movie Rampage, then you should know that besides The Rock some of the other cast members are Naomie Harris, Jeffrey Dean Morgan and Malin Akerman. Rampage is directed by Brad Peyton, and just like the arcade game, it focuses on three monsters that, thanks to some top secret genetic modifications, start to reap havoc throughout Chicago. In the end, we have provided some new international posters for Rampage that came courtesy of Johnson and his Twitter page. Check them out below!

Alert 🚨: THE RAMPAGE is officially unleashed around world APRIL 13th.
Of course it had nothing… https://t.co/DIBK2Ttgc4