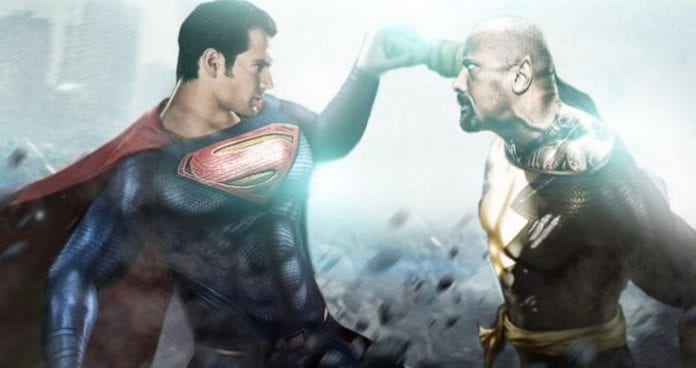 Marvel is not the only one preparing colossal superhero movies. Warner Bros has their franchise heroes, but some of their films feel like they will never see the light of the day. The fans are eagerly awaiting any news about Man of Steel 2, or the much-anticipated Black Adam. Now we might have a clue.

A few years back Dwayne The Rock Johnson and Henry Cavill teased a possible face-off between Superman and Black Adam when Cavill posted a photo of them together on Instagram. Now the turn was on Johnson to tickle the imagination of fans. But it wasn’t done by him but by his manager Dany Garcia, who also represents Cavill.

Garcia posted a photo of herself and Cavill. In the picture, they are talking about something covered in shadows. Dany captioned the photo with words: “Who is this man? What are we saying? What are we planning? Oh, it’s goood. You’ll thank me later.” You can see the tweet below.

Who is this man?
What are we saying? What are we planning?
Oh, it’s goood… You’ll thank me later. 😉@GarciaCompanies pic.twitter.com/NqQN3O0lY8

The photo is indeed a recent one, considering that Henry is no longer sporting his mustache. He was wearing facial hair for almost a year during the filming of Mission Impossible – Fallout. You probably remember ‘that’ famous CGI from Justice League trying to remove his mustache. It was an epic fail. Let’s not talk about it anymore.

In one of his recent Instagram posts, Cavill put a photo as a goodbye to his long-serving ‘stache. This was a sign that his presence on the set of Mission Impossible was no longer required.

Merry Christmas a Happy New Year from Superman and Black Adam @therock . Today we drink like gentleman and come together as friends. We’re excited for what the future brings.. #DangerousGentleman #DCWorldsWillCollide #Superman

Like you know Dany Garcia is involved in the production of most of Dwayne Johnson’s upcoming movies such as Rampage, Skyscraper, and Jungle Cruise. When it comes to Black Adam, we are sure that Garcia and Seven Bucks Productions will be a part of the project. This Twitter photo probably acts as a teaser for the clash between Superman and Black Adam.

But there is a possibility that they are talking about different projects considering that Garcia is Henry Cavill’s agent for almost two years. But, regardless of what it is, Garcia promised that it’s going to be good. And by our definition, the only good thing that could come out of it is Black Adam vs. Superman epic fight.