Dwayne The Rock Johnson has a busy schedule, but he will make some time to appear at highly popular The Graham Norton Show. This show will air on BBC in just a few weeks, and Norton and his audience will have an opportunity to hear first hand what The Rock is cooking.

Hollywood’s best-paid actor will use this opportunity to further promote his upcoming movie Rampage. As you probably already know, Rampage is an adaptation of arcade-game from the 80s. The promoting campaign for this movie is in full swing as the release date is less than two weeks away. If you don’t believe us, just take a look Dwayne’s Instagram profile. And to be fair, this film will need all the promotion it can get considering that Avengers: Infinity War hits the theaters shortly after it. Dwayne Johnson will release a new video of this action-adventure movie during his appearance on The Graham Norton Show.

The show will air on April 13th. Like it’s usual, there will be few more guests in addition to Jumanji: Welcome to The Jungle Star. His co-star from upcoming Rampage, Naomi Harris will also be there, together with Martin Freeman whose most recent project Black Panther smashed at the box office. The last member of the April 13th lineup will be former The Who frontman Roger Daltrey who will be in charge of music part of the show. 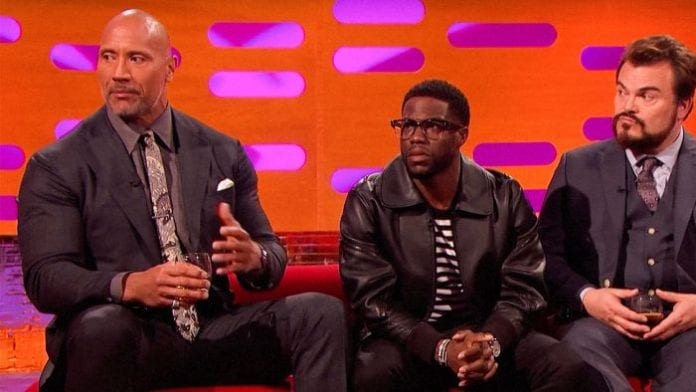 If you can recall, the last time Dwayne Johnson was guest at The Graham Norton Show was in December of 2017. On that occasion, he used his appearance to promote, at the time, upcoming Jumanji movie. His co-stars Kevin Hart and Jack Black were also the guests. Considering how well Welcome To The Jungle performed at the box office, Grahams super-popular TV Show might be an ideal place to promote Rampage.

After the latest movie in Dwayne’s resume hits theaters, you will have a chance to enjoy Johnson in another exciting action-thriller called Skyscraper which premieres on July 12th. After that you can see him in Fighting With My Family, Shazam!, and then in many others, but that’s a whole another article. The full list of Johnson’s upcoming movies can be seen at this link.