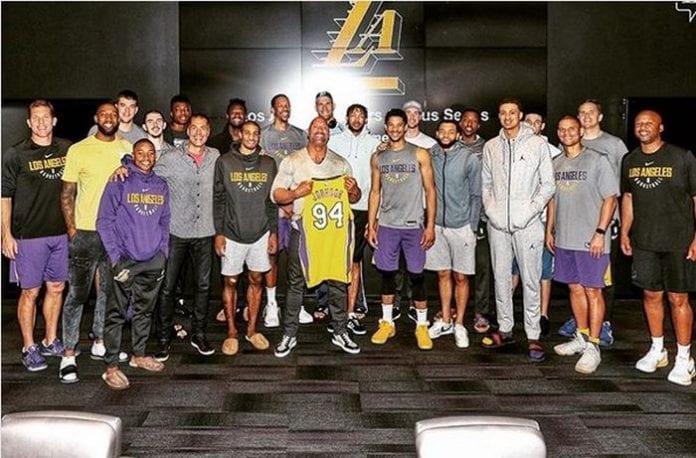 Dwayne The Rock Johnson knows what it means to grind to get something in your life through sheer effort. If you look at his box office schedule, he almost has a movie coming out every month or so. And in spite of this he works out like a madman, makes time for movie promotions, charity work, and random visits to fans, family, and various organizations.

A few days ago he paid a visit to Los Angeles Lakers before their game vs. Denver Nuggets. People’s Champ was there to give Lakers young team life advice and few words of wisdom that should motivate them to have success down the line in their lives. He obviously was successful in doing so because LA Lakers won the game 125-116. LA franchise found themselves in good form winning in last eight out of 11 matches.

After meeting with LA team Dwayne Johnson took it to Instagram, as he usually does, to thank Lakers ownership for the opportunity to talk to their young team. On the picture, you can see Johnson standing surrounded by players while holding teams jersey with number 94 on it. Jumanji: Welcome To The Jungle star commented that he saw a lot of “hungry eyes” in that locker-room. His advice was to stay hungry and never get full.

The exact photo caption on Instagram says: “I feel like @kevinhart4real. I saw lots of hungry eyes during my pre-game talk with the LAKERS. Thank you @lakers ownership and coaching staff for the invite to speak to the players. We’re all hungry to win. But the key to long-term impactful success – is never being full. Stay focused & hungry boys, and I’ll see ya down the road.”

The quote was followed with hashtags #HardestWorkerInTheRoom #AndTheShortestDudeInTheRoom #PreGame #LAKERS.

After the visit to the LA Lakers was over Dwayne Johnson dedicated himself to promoting his upcoming movies Rampage and Skyscraper which hit theaters on April 11 and July 12, 2018, respectively.