The feud between Dwayne The Rock Johnson and Vin Diesel was a massive one. More than a year has passed since it started and people are still talking about it. In a most recent interview, People’s Champ put some light on what went behind the curtains.

While interviewing for May edition of Rolling Stone magazine the question about the feud between two superstars was asked. Jumanji: Welcome To The Jungle star finally gave an honest answer to what was that initiated their conflict. It’s not easy to annoy Johnson considering his positiveness and happy demeanor. But Diesel did precisely that.

Two actors share the screen in one of the main scenes in The Fate Of The Furious but fans didn’t miss the fact that they have very little on-screen time together.

The Rock was the one that confirmed that the two of them refused to shoot together: “That is correct. We were not in any scenes together. Vin and I had a few discussions, including an important face-to-face in my trailer. And what I came to realize is that we have a fundamental difference in philosophies on how we approach moviemaking and collaborating. It took me some time, but I’m grateful for that clarity. Whether we work together again or not.” 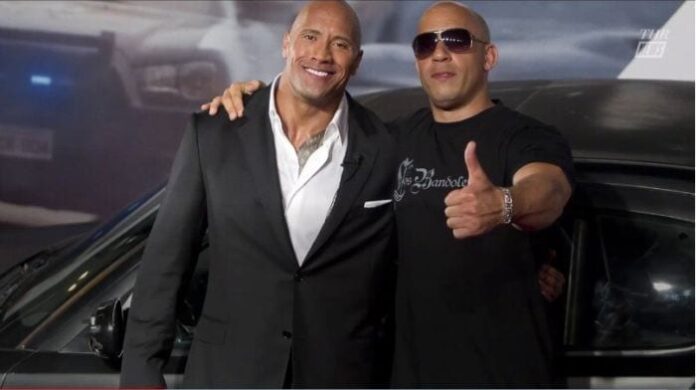 The first sign that something is not right at the Set of the Fast & Furious franchise was when Johnson put a post on Instagram stating his dissatisfaction with one of his cast-mates calling them ‘candya**es’ in the process.

It was confirmed by the Rampage star himself that they had beef and that was a severe disagreement between him and Riddick Chronicles actor. The conflict led to Johnson’s statement that he’s not sure if he’s going to be a part of the ninth installment of F&F franchise. At the moment Dwayne is focused on making Hobbs spin-off with Jason Statham. Unlike with Diesel, The Rock and The Stath get along exceptionally well. The movie will be out on an undisclosed date in 2019. Fast 9 is expected to be delivered on 10th of April 2020.

Talking about Fast 9 Johnson said: “Right now I’m concentrating on making the [Fast and Furious’ Hobbs and Shaw] spinoff as good as it can be. I wish [Diesel] all the best and I harbor no ill will there, just because of the clarity we have. Actually, you can erase that last part about ‘no ill will.’ We’ll just keep it with the clarity.”

It would be strange not seeing Dwayne Johnson in the next installment of this popular franchise, especially if we recall that he was the one setting it on fire with an appearance in Fast Five. The Fate of The Furious was a massive hit at the box office grossing more than $1.2 billion.