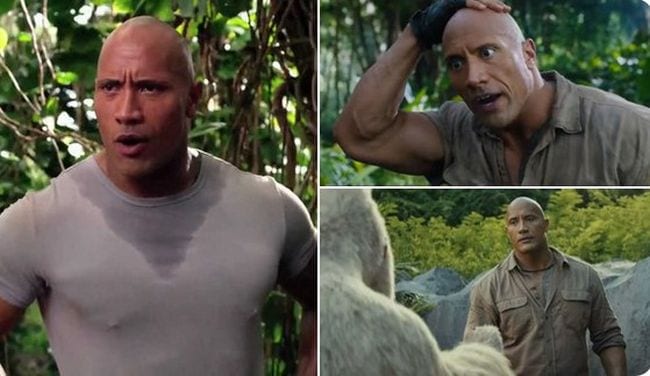 Dwayne Johnson, also known for his wrestling nickname The Rock, is former WWE superstar and current Hollywood star. He is social media persona No1 and a generally loved man. After starting his acting career, he appeared in more than 100 movies. Don’t believe us? Just take a look at his IMDb page and filmography. It tells a story of its own.

Most of anything else, Dwayne Johnson is an action star. Some of his movies can be described as generic, as they have similar plot and setting. If you are a fan of his, or films in general, and have watched all of Johnson’s films you would have to be blind not to see the similarity between some of his roles. According to one Twitter user, The Rock seems to love movies with a specific dress code, setting, and plot. Take a look at his tweet below.

These are three separate movies pic.twitter.com/ZsqmhJx5vj

Yup, these scenes are from three different films. The Rock has a thing for jungle environment, gray shirts, and sturdy look. In all of the pictures, his muscles are preying under the gray shirt ready to confront whoever he’s looking at.

The person who tweeted this obviously has many people who think the same, as his opinion was liked more than 117,000 times on Twitter. Many people started debates of their own and talk of Dwayne’s movies spread around this social network like wildfire.

Welcome to the jungle, we’ve got The Rock.

The Pitchman: So in THIS scene you’re in the jungle and…

Ok but they’re all part of the Rock Jungleverse.

Dwayne “The Rock” Johnson loves all of his roles and movies, but now it seems that he’s perfect for gray shirt-jungle typecast roles. These pictures prove our point. If you are interested, the films in question are Journey2: The Mysterious Island, Jumanji: Welcome to the Jungle (this movie currently smashes at the Box office), and upcoming Rampage.

There is a 5-year gap between Journey 2 and Jumanji, so The Rock ages as fine wine but some roles simply don’t change. At least not for him.