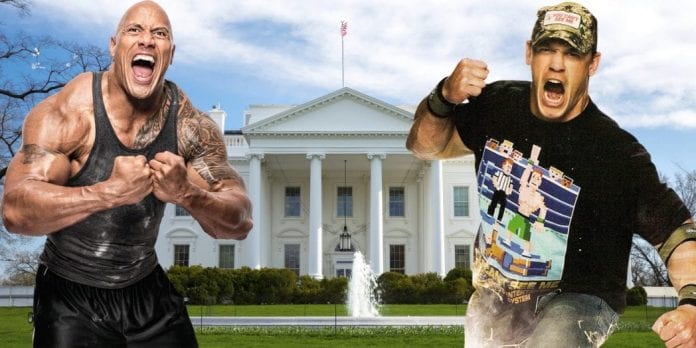 Take a look at this segment from Caity Weaver’s GQ profile of popular Hollywood actor Dwayne The Rock Johnson and you will see that he might actually run for office. This piece states:

“Last June, when The Washington Post published an op-ed suggesting he could be a viable candidate, Johnson posted a screen grab and gave the idea a boost. On Instagram, he called the Post piece “interesting” and “fun to read,” adding that “the most important thing right now is strong honest leadership from our current and future leaders of this country.”

Since then, Johnson tells me, he’s given the question more thought. “A year ago,” he says, “it started coming up more and more. There was a real sense of earnestness, which made me go home and think, ‘Let me really rethink my answer and make sure I am giving an answer that is truthful and also respectful.’ I didn’t want to be flippant—‘We’ll have three days off for a weekend! No taxes!’”

So, after all that consideration, Johnson doesn’t hesitate when I ask him whether he honestly might one day give up his life as the highest-paid movie star on earth—which is unquestionably easier, more fun, and more lucrative than being the President of the United States—in order to run for office. “I think that it’s a real possibility,” he says solemnly.

Dwayne Johnson talks really smart about politics and here is one of his statements from the interview with Weaver. He said: “When there’s a disagreement, and you have a large group of people that you’re in a disagreement with—for example, the media—I feel like it informs me that I could be better.”

It is clear that the politics have changed and year after year, people are getting more and more disappointed with the president and high-authority figures who shape our world. The bar has been lowered, and we have seen some of the actors running for office and some of the candidates who focus only on their charm, disregarding their political knowledge and experience.

Back in 2000, Johnson appeared at the Republican National Convention to introduce House Speaker Dennis Hastert and Weaver explains Johnson’s character in the following sentence: “For Johnson, there are no strangers; there are simply best friends, and best friends he hasn’t met yet.” Most of the politicians would love to possess this kind of talent, charisma, or whatever you would like to call it – Bill Clinton had that sometimes, like him or not.

If Johnson were to represent the Republicans, the Democrats would have to respond with the wrestler called John Cena. Remember that three-minute “Love Has No Labels” PSA by the Ad Council? If you do, you must know that John Cena delivered that great speech and although he didn’t write it, he was so convincing. If you watch some of his speeches and discussions about politics, you will see that Cena is eloquent, affable and he could really attract younger voters.

This has not been the first time that someone mentions the political battle between Dwayne Johnson and John Cena and you can see various tweets regarding this topic. The Rock and Cena have enough time to prepare and generate support and believe it or not, we would like to see them running for President. Just imagine the voter turnout – it would be outstanding!

These are not jokes, and people would actually love to see their idols running for office, but when you think about it, wouldn’t you like to see someone with the great political track-record who can improve this country? Politics is a tremendous topic for jokes, but a country should be run by educated and smart people (Not saying that Johnson and Cena are uneducated or ignorant, but politics is not their field of expertise). As Plato once said: “One of the penalties for refusing to participate in politics is that you end up being governed by your inferiors.”